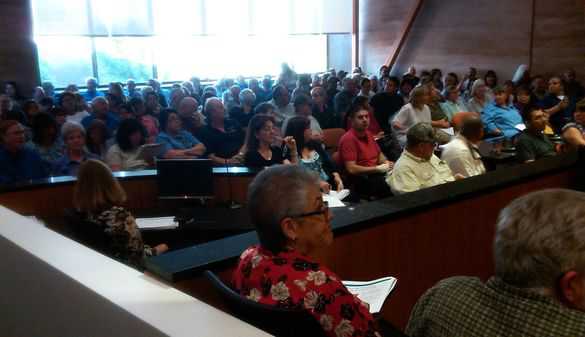 People jammed into the Public Employees Retirement Association (PERA) meeting in Santa Fe Monday with many more turned away for lack of space.

The agenda item that drew the massive crowd is proposed cuts and changes to the retirement plan affecting thousands of employees across the state and hundreds in Los Alamos.

PERA’s assets declined by a staggering $6 billion during the global financial market downturn of 2008-09.

Although PERA’s assets have increased since the downturn – a $5 billion pension liability remains, according to PERA’s board.

Paying off the pension liability cannot be made up by stock market returns, or by increasing employee and, or employer contributions.

The board explained that significant changes to the benefit structures of not only new hires but across all membership groups are necessary.

Without these changes, the board says the actuaries estimate that in 2041, the market value of fund assets would be about $30 billion, while the benefits owed would be about $56 billion – leaving $26 billion in benefits without the funding to pay them. 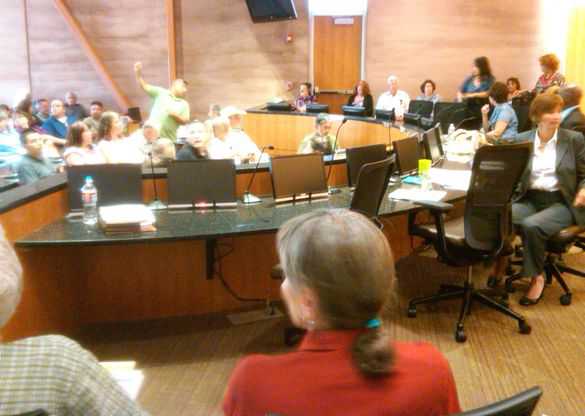 To become fully funded by 2041, the PERA Board is proposing changes that will affect active employees, new employees, retirees, beneficiaries and employers.

“PERA was funded at 70.5 percent as of June 30, 2011, with an unfunded actuarial accrued liability of $4.9 billion. This has to be addressed, and the sooner we do it the less painful it will be,” Hall said. “There are only three sources of potential funding – current retirees, those still working in the system, and the taxpayer (through public employers.) I would carefully examine any proposed legislation for fairness and financial sustainability of the program. I do have a bias to try to protect retirees with the least financial resources.”

In the interest of full disclosure, Hall added that he collects a small pension from PERA.

Martinez explained that PERA board member Loretta Naranjo-Lopez has reported that Cavanaugh MacDonald Consulting LLC was hired to perform an Open Group Study of the issue.

There have been nine changes in the PERA COLA since the 1965 state statute, and it is currently at 3 percent, Martinez said, adding that New Mexico, Arkansas and Mississippi are the only state public pension funds that continue to provide retirees with an annual 3 percent compounding COLA in the face of significant funding losses for most retirement funds.

“Every other state public pension plan pays lesser COLA benefits. Often other states tie the COLA calculation to how well the plan is funded or the Consumer Price Index,” Martinez said. “Several states have suspended paying COLAs altogether until the pension plan reaches 100 percent funding. I would encourage the board to provide several scenarios that provide the basis for a possible solution, i.e., set retirement benefits based on the average of an employee’s seven highest years of salary rather than the current average of the three highest years, etc.”

Martinez also said that he would urge the board to recommend further consideration only to those scenarios which result in at least 100 percent funded ratio at year 2041 without additional contributions.

The longer changes to the PERA retirement plans are delayed, the more drastic the changes will need to be in the future, he said.

“This is a very complex issue that will impact many households and I will want to be assured that all the options have been explored, so we can vote on a piece of legislation that preserves the benefits for the many retirees who depend on it,” Martinez said. 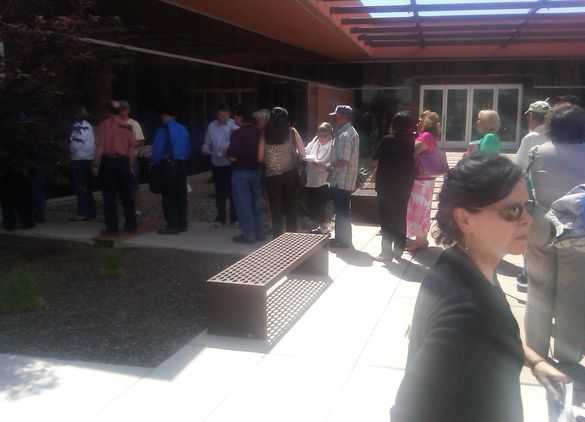 A long line of PERA members wait to attend Monday’s meeting in Santa Fe, many were turned away because the room was full. Courtesy photo

The plan the PERA board is currently proposing affects three groups of members differently.

The proposed changes will be voted on by the PERA board then taken to the 2013 legislative session in January.

If approved, these changes would take effect July 1, 2013.