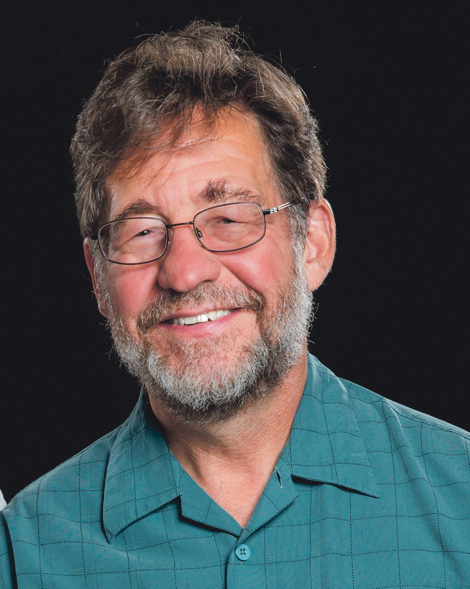 One of PEEC’s most creative volunteers is Dr. Galen Gisler.

Gisler was born under the dark and starry skies of New Mexico. As a child he read about Saturn floating on water, an analogy from one of his well-loved science books. He imagined the planet floating in his bathtub in Clovis, where he was raised. In that moment of wonder and curiosity, a seed was planted. It grew into a passion for astronomy, one that would last a lifetime and enable him to share his knowledge and curiosity with others.

The key thing about that moment of wonder, was that Gisler wanted to know more than fun facts, he wanted to know how we come to discover these facts. The more remarkable thing, to Gisler, was that we could “weigh” Saturn, and measure it, without going anywhere near it. That triumph of the human intellect was what he aspired to, and what inspired him to become a scientist.

With a bachelors degree in physics and astronomy from Yale University and a PhD in astrophysics from the University of Cambridge (England), Gisler went on to postdoctoral positions at the Leiden University Observatory (Netherlands) and Kitt Peak National Observatory (Arizona).

In 1981, following his postdoctoral work, he found his way back to his home state, where he began a 25-year career at the Los Alamos National Laboratory (LANL).

During his career he was involved in a variety of activities including extragalactic jets, particle beams, plasmas, astronomical transients, adaptive processing, and hydrocode simulations of impact processes and tsunamis. From studies of violent processes at the centers of galaxies, gamma-ray bursts, and solar flares, Gisler became interested in violent processes here on Earth, specifically explosive volcanism, landslides, and tsunamis. The impact of the comet Shoemaker-Levy 9 in 1994 sparked his interest in asteroid impacts, and he has been actively contributing to the subject of impact-induced tsunamis since 2002.

He retired from Los Alamos National Laboratory in 2006 to take a position at the Center for the Physics of Geological Processes at the University of Oslo. When his term at the Center ended in 2012, he returned to Los Alamos, but still retained a part-time position in Oslo. Gisler currently works part-time as an associate scientist at LANL on methods for defending Earth against asteroid impacts. If you have seen the movie Deep Impact you know how important (and exciting) it is to save the Earth from meteor-induced demise.

Gisler and his wife Susan, have a son and daughter. The kids left the nest in mid- 2000. Galen and Susan eventually returned to Los Alamos in 2012. At a reunion a friend told them that PEEC would be moving into a beautiful new location that would include a planetarium. Galen had visited planetariums across the country and was thrilled to have one so close to home. Soon after, he applied to be a PEEC volunteer.

Years later, Gisler is still volunteering in the planetarium. I asked him what the planetarium shows offer that is not available when you step outside and see stars. His response was very motivating,

“In the planetarium we can digitally move our view of the solar system to outside of the Milky Way and look down into our galaxy, quite fascinating, or even go back in time and look at the galaxy 200,000 years ago. It’s like modern time travel. We can also look at the sky that is current or upcoming.”

If he had one wish, it would be to travel the universe, find a way into space, visit some stars, and go beyond our own galaxy. He would view our galaxy from a different perspective. Sitting in the PEEC planetarium and navigating through the digital programs is the closest he can get to his wish.

Gisler also enjoys interacting with visitors, narrating planetarium shows, and writing curriculum for PEEC’s astronomy science programs. He knows his stuff and can answer any question you throw his way. I challenge readers to attend one of his shows to try and stump him with your astronomical questions.

In fact, Gisler enjoys the array of questions and is happy to use the planetarium as a tool for education, sparking excitement about science and the curiosity of objective truth. He is creating many “Saturn in the bathtub” moments. Gisler, along with two other astronomer PEEC volunteers, Rick Wallace and Paul Arendt, developed what I believe to be the most fun planetarium show in the entire galaxy. Under the creativity of Rick Wallace, they are using different colored Star Wars lightsabers to teach ionization emission colors and how they relate to stars. The battle, I mean “educational demonstration,” was a hit with the children and adults.

Outside the planetarium dome, Gislerenjoys hiking and skiing. He and his clan frequently cross-country skied in Norway, and he reminisces being paced by local 3yr olds. He jokes that Norwegian children grow skis in the womb. Gisler found it amazing to watch small children race across the shimmery stardust surfaces.

He told of Norway’s beauty and went on to brag about our own beautiful surroundings here on the Pajarito Plateau.

“I am glad to live in area that has such variation, from the pinion and juniper in White Rock to the spruce and aspens in the Jemez. It’s fascinating to watch the recovery from the fires.”

His children helped with tree planting projects after the fires. Trees that were then 1-2 feet when carefully planted are now much much taller, just like his children!

I hope others can find the same sense of wonder that Galen shares. His awe of the universe that surrounds us, as well as interest in the forces beneath our own feet, is contagious.

If you are interested in learning more about PEEC and the Los Alamos Nature Center at 2600 Canyon Road visit peecnture.org.