There have been three major geologic events that have contributed to the creation of the Pajarito Plateau. Two events occurred 1.0 and 1.4 million years ago when major eruptions to the west of Los Alamos created the Valles Caldera. Volcanic tuff from these eruptions accumulated hundreds of feet deep and created a broad plain extending from the Caldera to what is now the Rio Grande.

These eastward and southeastward flows encountered basaltic lava flows coming from another volcanic field to the southeast of what is now White Rock. Lava flows and the slumping of the sides of what is now White Rock Canyon resulted in the repeated damming of the Rio Grande. Erosion of the dams allowed the river to flow again and drain the lakes behind them.  These lakes varied in size but the largest lake was created 2.35 million years ago and extended to what is now the Abiquiu Reservoir. White Rock was partly covered by this large lake. Today you can observe the salmon and white colored tuff in the canyons toward the Valles Caldera and find lake-cobble stones toward the Rio Grande.

These three events were dramatic and occurred during short periods of time in geologic terms. The fourth event is different.  It began 1.0 million years ago and has been ongoing ever since.  This event is the erosion of the Pajarito Plateau. Erosion has created a series of parallel, deep canyons in the plateau. The magnitude of this erosion can be measured in two ways.

Pueblo Canyon is approximately 450 feet deep when viewed from the eastern entrance to Los Alamos.  This means that an average of about five inches has eroded away every thousand years during the past million years.  This is very slow rate on a human time scale, but it has resulted in the canyon we see today.  However, there is much variation around this five-inch average.  When the climate provided more rain and snow, then the Pajarito Plateau was more completely forested and less erosion occurred. If a period of drought and forest fires occurred, then the more exposed soil was more quickly eroded.

Humans also have an impact through what may seem like minor activities. An example of this can be seen in Cebolla Canyon. It is located south of El Malpais National Monument. Farmers came to this area in the 1930’s because water was available. A dirt road provided access to a farming area. This road followed the lowland and inadvertently provided a channel for stream water. A canyon up to 40 feet deep was cut over the next 80 years. This is a far greater rate of erosion when compared to the Pajarito Plateau’s five inches every thousand years.

The walls of a canyon provide a way for ground water to percolate out of the adjacent soil. Less water is then available toward the surface of the surrounding land. Trees may no longer grow and may be replaced by grasses. The land becomes even more easily eroded. 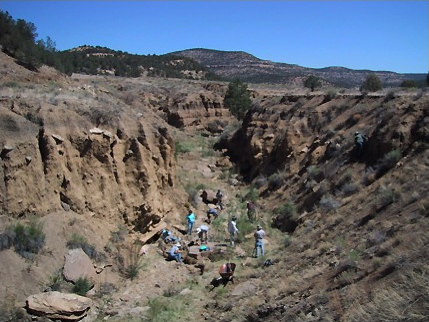 Happily, people can remediate eroded land. The speed of water moving through a canyon can be reduced or stopped by building dams from brush, branches or stone across a canyon steam. The dammed water then can percolate into the surrounding land.  Plant life now can grow more readily, reducing erosion. People are learning to copy the kind of dam made by beavers.

People also can direct erosion to change a straight channel into a meandering channel. A bar of wooden stakes, brush, branches, or stone may be built partially across a stream from one side. Water then can be directed toward the other side. Curves are created and a slower, longer stream is created. The curving, more slowly moving steam now provides more distance and time for water to percolate into the surrounding soil. Small ponds along the channel may remain after the stream stops flowing from time to time. 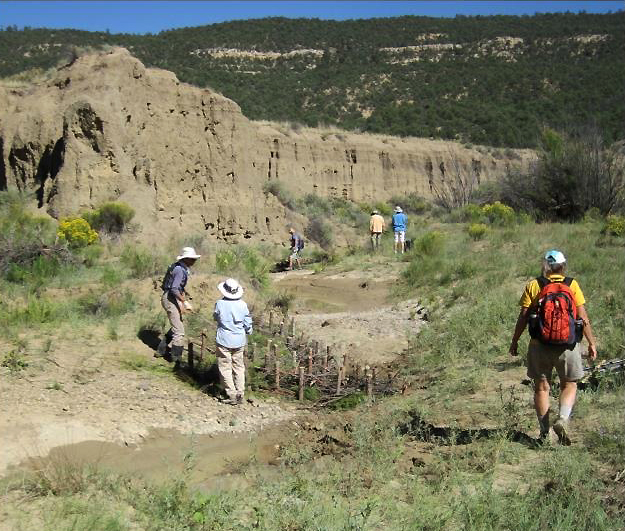 Making a dam along the stream bed in Cebolla Canyon. Courtesy/Albuquerque Wildlife Federation 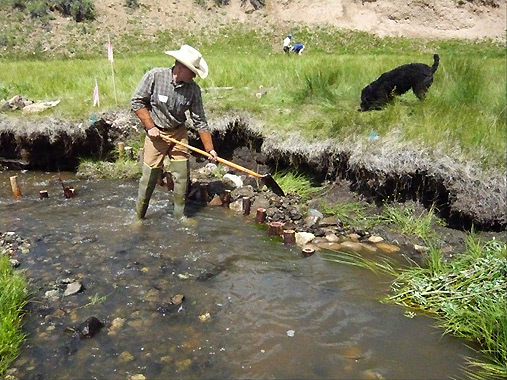 Constructing a bar extending from one side of a stream. Photograph from ‘Let the Water Do the Work’ available at http://tinyurl.com/qz6nmtx