How many of us remember when we had to evacuate Los Alamos due to the Cerro Grande forest fire?

Many drove down the forest road through Rendija Canyon that passes by the Sportsmen’s Club as part of evacuating Los Alamos and remember this part of the evacuation very well.

But how many of us recall the tall, silent hoodoo rock formations that stood beside the road as we drove by?

About six of these sentinels stand near the road, one of them almost 20 feet tall. Other hoodoo formations in our area occur in lower Pueblo Canyon, the trail to Upper Falls in Bandelier, and Kasha-Katuwe National Monument near Cochiti Pueblo.

With such a spooky name (also the name of the magical practice of voodoo) a good time to view hoodoos would surely be Halloween evening.

If you’re brave, try going out to one of these hoodoo spots just as the sun is setting—you could hike out Deer Trap Mesa and look eastward toward the forest road below. A set of binoculars will help.

The hoodoos are impressive and cast long shadows as the sun sets. But what are they, really?

Hoodoos are a remarkable kind of rock formation. Also called tent rocks for their conical shape, they are towers of rock that may be a couple of feet to many feet in diameter, tapering toward the top.

Their height varies from a few feet to well over 20 feet, as in the case of the hoodoos along the forest road by the Sportsmen’s Club.

Hoodoos result from particular geologic conditions and erosion. Initially, layers of relatively soft, erodible rock were created over many millennia.

For the Los Alamos area, the layers are of sedimentary rocks and aggregates. These relatively soft layers were then covered by harder rock composed of lava flows coming from the Valles Caldera.

In time, rain and wind, possibly helped by alternate freezing and thawing of water, eroded these layers.

In some cases a cap of hard rock developed as softer rock eroded away around it. As erosion removed the surrounding rock and continued downward, the hard rock cap shielded the softer rock directly beneath it from erosion. A cone-shaped column of rock emerged as a result.

A hoodoo can provide a geologic picture of the history of the Pajarito Plateau. In some of the hoodoos 10 to 15 layers of rock can be observed.

Some layers are composed of finer sedimentary rock, and other layers contain gravel aggregates.

We are seeing alternating layers of mud or lake gravel that spread throughout the area and then solidified into a soft rock.

A variation of the columnar hoodoos can be seen at Kasha-Katuwe (Tent Rocks) National Monument.

Here the caps of hard rock lie over a thick layer of soft pumice rock. In addition, the rock caps are relatively small and the erosion relatively fast. The result is circular, tent shapes rather than columns. 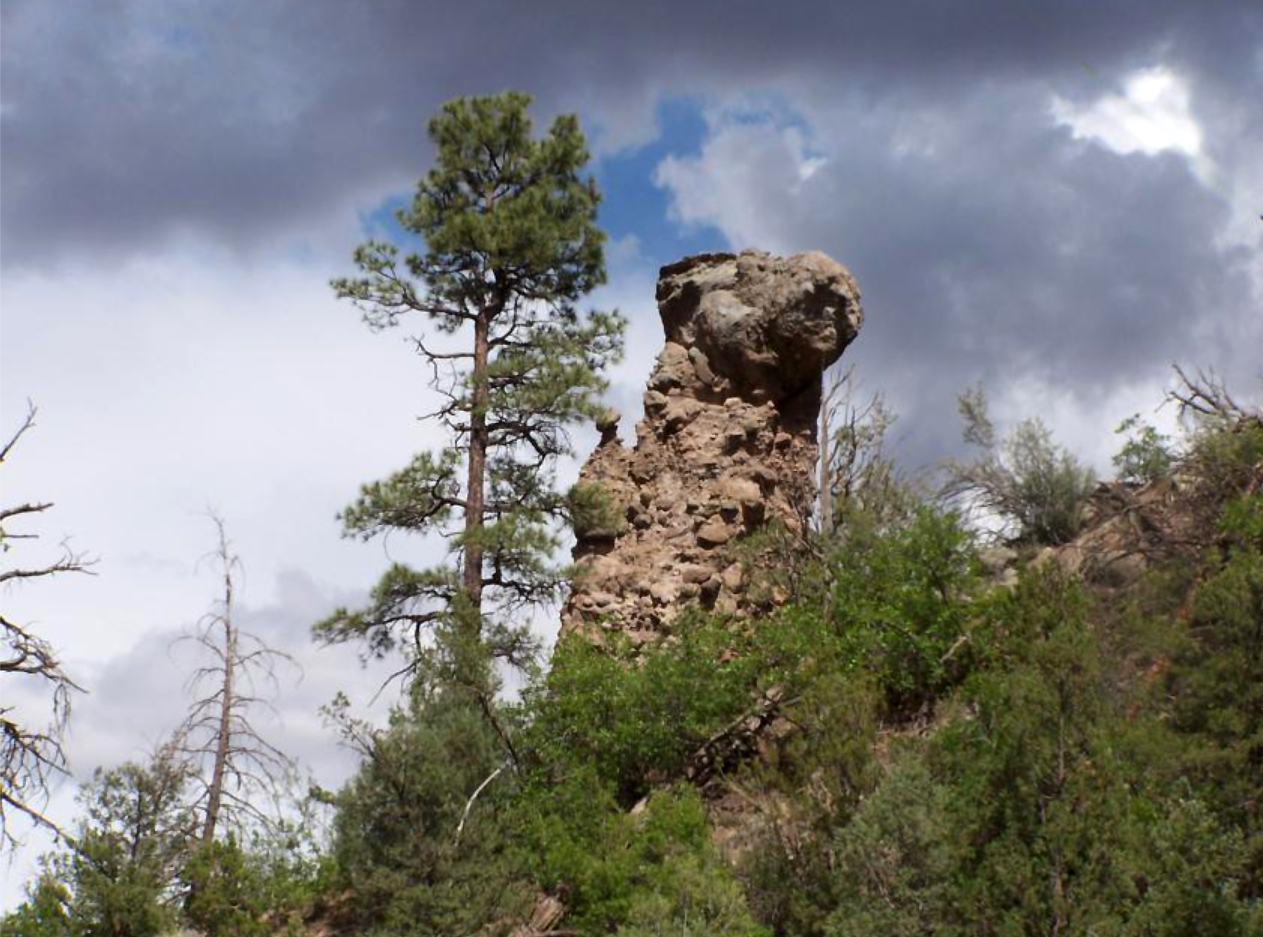 A hoodoo stands as a sentinel along a forest road. Photo by Robert Dryja 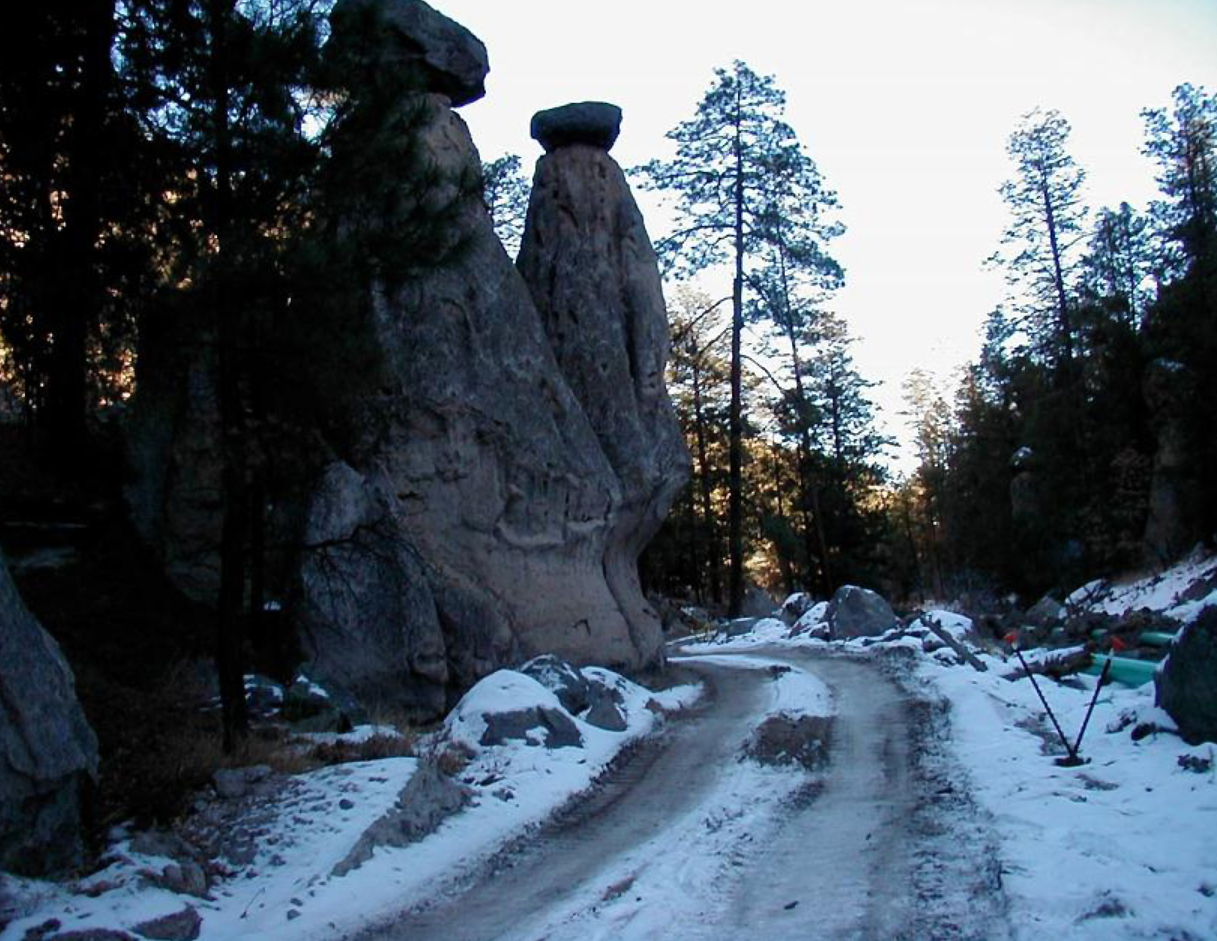 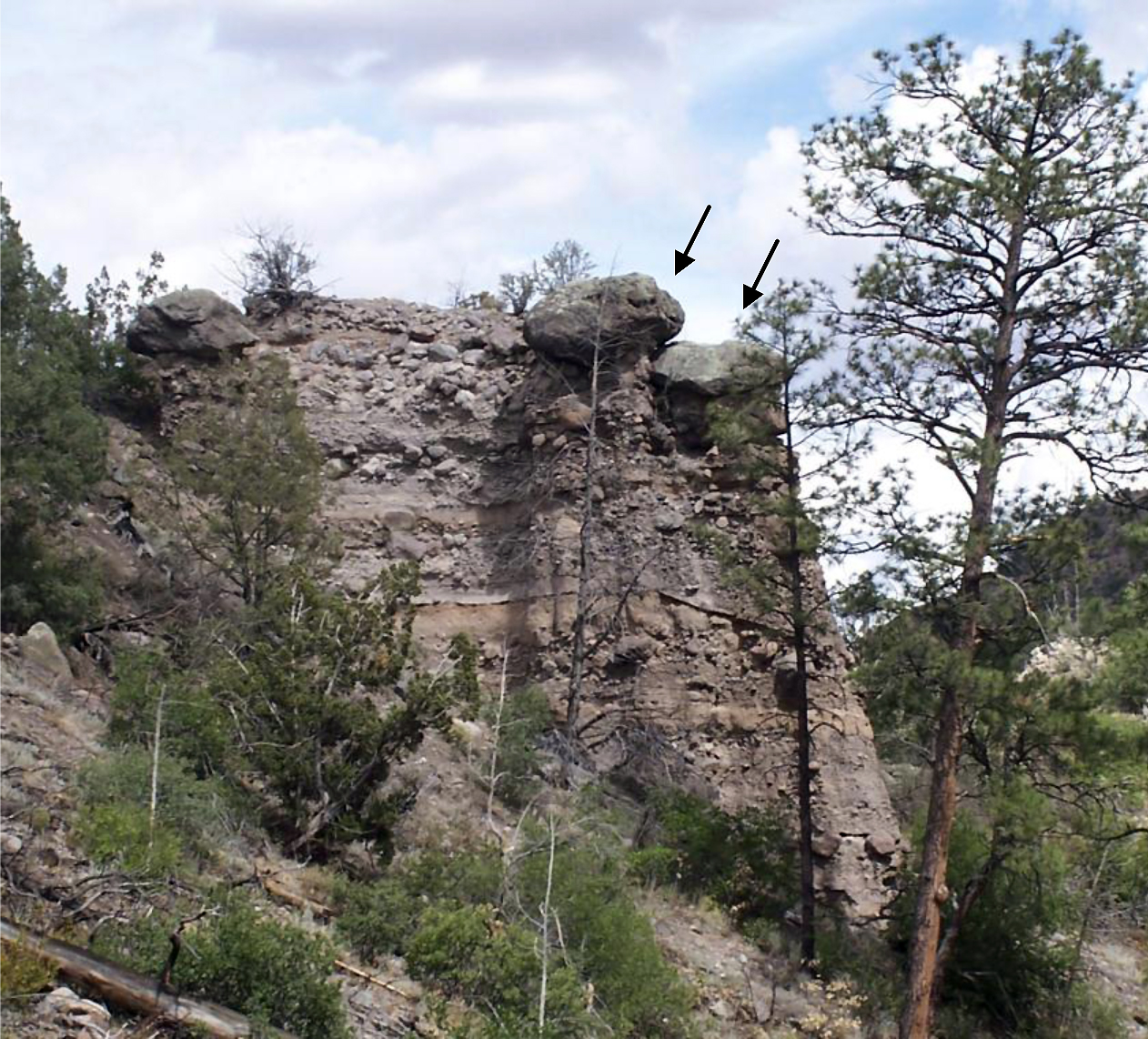 Two hoodoos are beginning to emerge on the right. Ten alternating layers of gray gravel and brown sedimentary rock can be seen below the cap stones. Photo/Bryce Canyon National Park Website 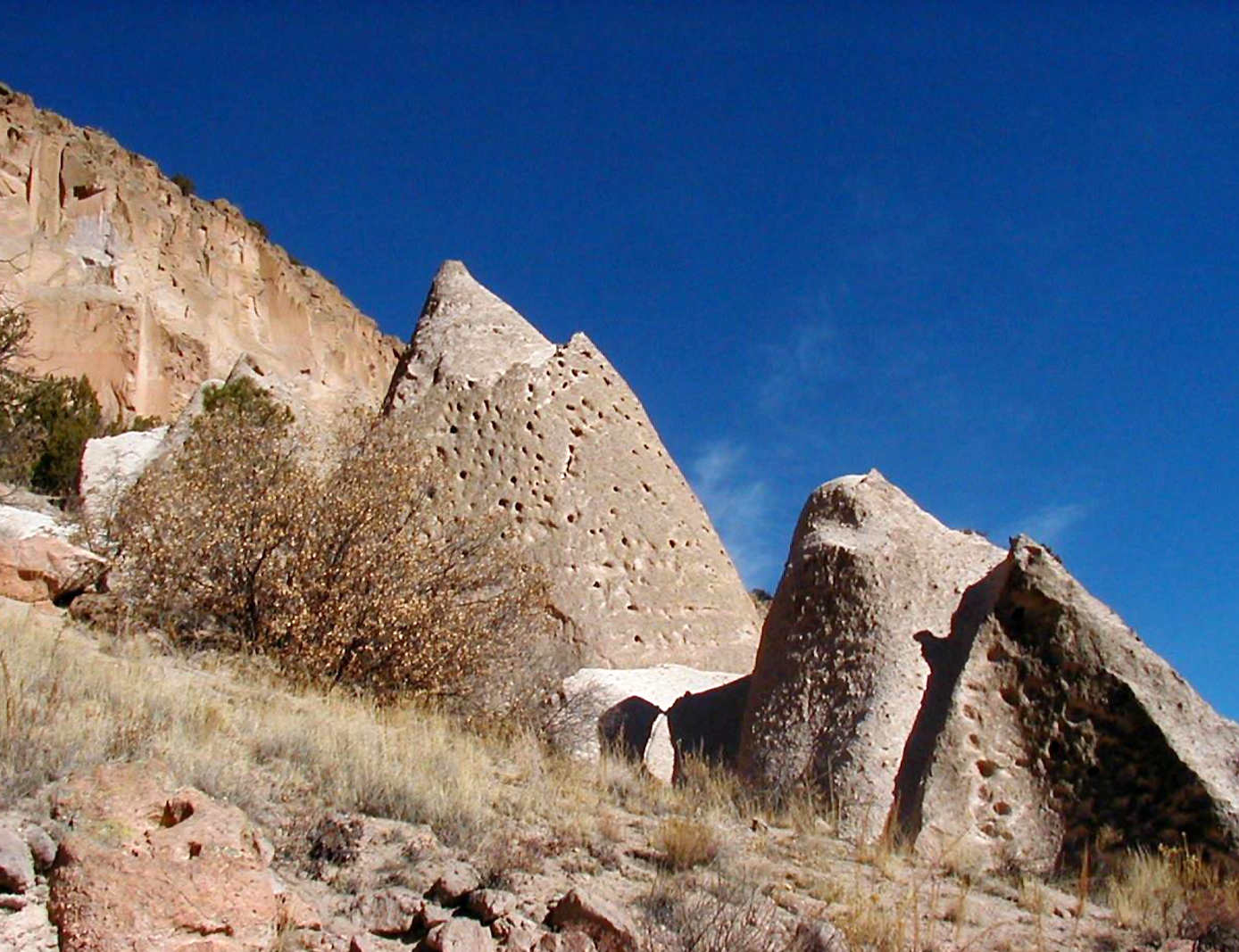 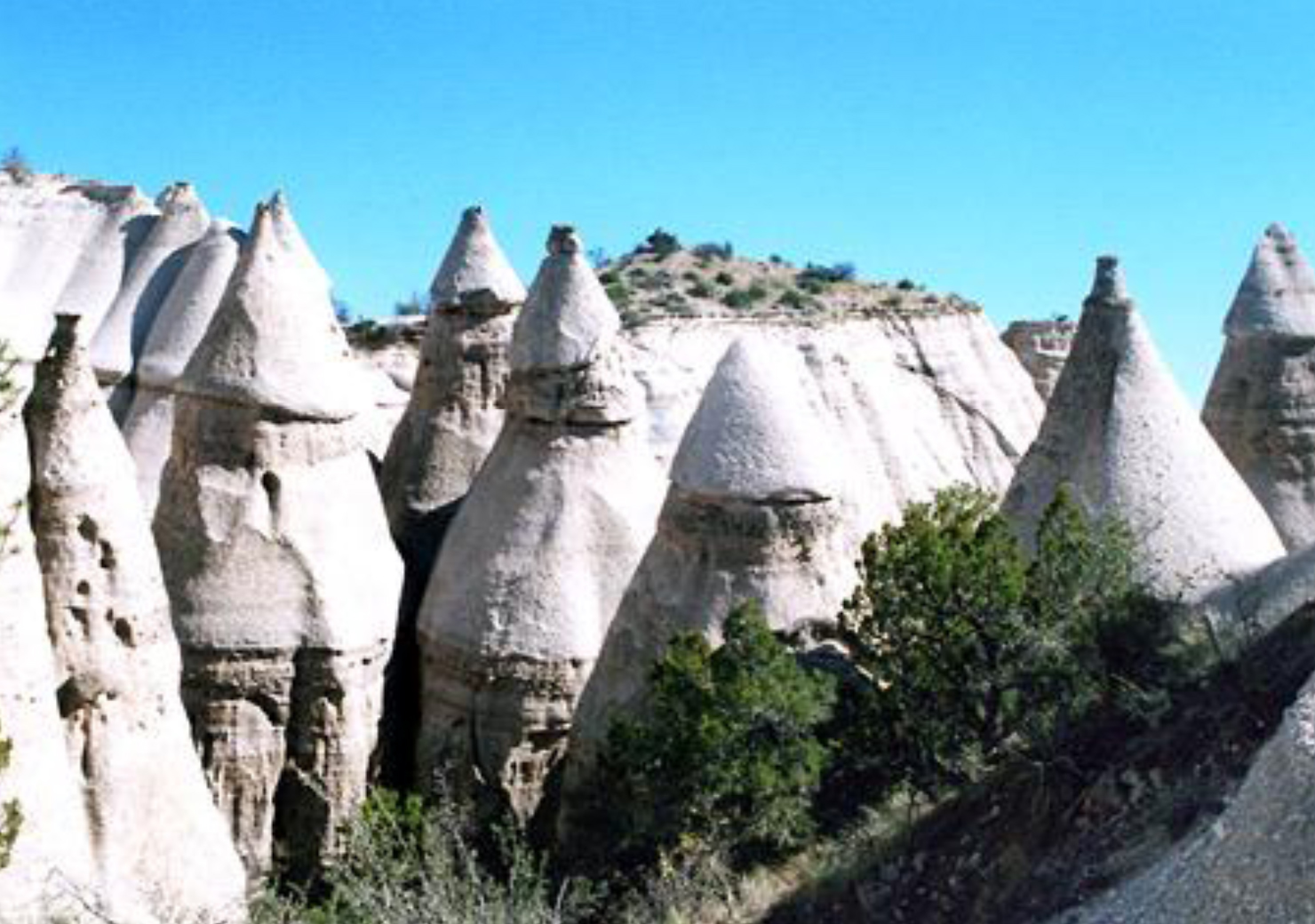