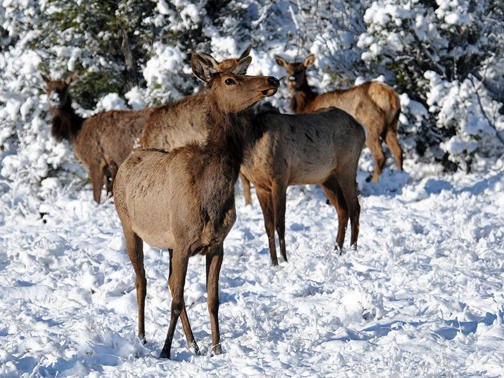 We tend to think of elk as always having been present and abundant in the Jemez Mountains. It is therefore surprising to learn that elk were not common in preceding centuries and had been extirpated by about 1910.

The Jemez Mountains typically were covered by pine trees through most of the 20th century. Grasses and forbs grew in relatively small open areas throughout the forest.

These open areas usually were created by small, low intensity forest fires caused by lightning. The Valle Grande is one of the few large open areas with grasses. However, the Valle Grande is at a high elevation and has long, cold, snowy winters. As a result, it does not have large areas of good habitat for elk.

The La Mesa Forest Fire changed this when it burned 15,444 acres, destroying what had been predominately a forested area. (Burnt Mesa is part of the area burnt by the La Mesa Fire.) Grasses now grew abundantly and provided an alternative grazing site in the winter to the Valle Grande.

Research indicates that an estimated average of 1,425 pounds of forage can be produced on an acre of grassland during a growing season. If half of the 15,444 acres has accessible forage, then an estimated 5,502 tons of forage becomes available each year for elk to eat. The La Mesa Fire therefore resulted in more food and better living conditions at a lower elevation for elk.

The grasses and forbs of the La Mesa Fire area benefited initially by having the trees destroyed. The grasses could then grow in an open and sunlit landscape. However, the grasses have faced two difficulties. There is less rainfall where the mesa decreases in elevation toward the Rio Grande.

Additionally, the growing elk population eats more of the grasses and forbs. Thus the lower area toward the entrance to Bandelier National Monument is a more difficult environment for the elk. 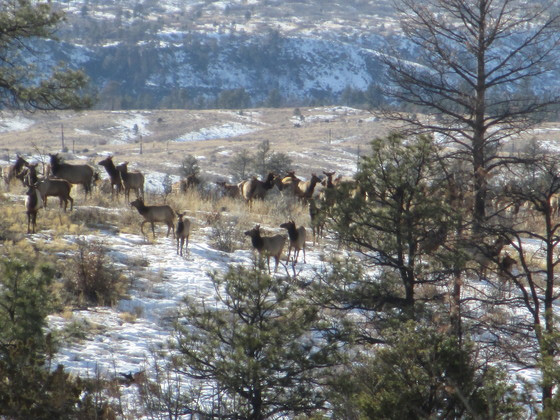 Elk in the Burnt Mesa area. Photo by Lisa Shymkus

New ponderosa trees eventually will replace grasses and forbs in coming decades. The new growth of ponderosa trees is benefiting from the increased elk population. The elk are eating a major portion of the grass and forbs and this makes it easier for the trees to grow.

However, the elk population eventually will face a difficulty since the ponderosa trees will replace grasses and forbs. The mesa area will not be able to support as many elk as it becomes more forested.

The moral of this story is that different plants and animals benefit at different times from a forest fire. Grasses and forbs are the first to benefit following a fire. Trees no longer shade them and do not compete with them for available rainwater.

Elk are the second to benefit, with more grasses and forbs growing and providing more food.

Ponderosa trees are the third to benefit. The increasing elk population reduces the grasses and forbs that otherwise are competing with the young trees for nutrition and water from the soil. The forest may be re-established sooner.

Ultimately there will fewer grasses, forbs and elk in the mesa area as it is increasingly covered by forest, particularly in the higher elevations toward the Valle Grande. This assumes that a new forest fire does not occur.

However, the elk are fortunate because three other large forest fires have occurred since 1977. The Dome, Cerro Grande and Las Conchas forest fires all have been larger than the La Mesa Fire and so more of the landscape has become available for grasses and forbs to provide food to the elk. Grasslands now are adjacent to Los Alamos with elk beginning to appear. Indeed, at least one elk has been seen in a backyard. 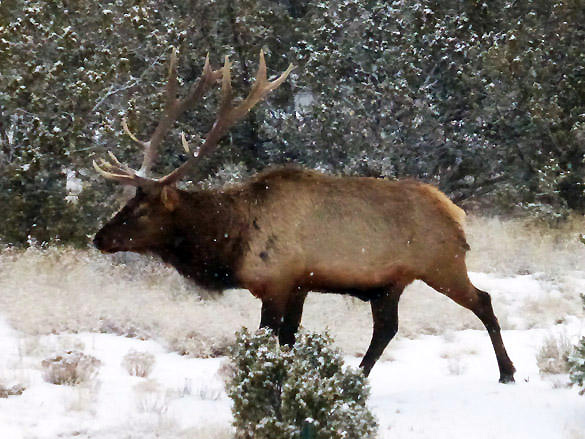