Sheep herding on a large scale developed in the early 20th century in the Valles Caldera. For example, Franklin Bond, the owner of this area, established 17 sheep camps for the summer of 1918 with an estimated 21,000 sheep among them.

He employed 73 people to help with the sheepherding. Another person estimated that 100,000 sheep were grazing in the area in the summers of 1917 and 1918.

This suggests that up to 350 people were involved in sheepherding when compared proportionally to the Franklin Bond employment.

Cattle ranching become more dominate after World War II. An estimated 3,100 to 12,000 cattle were brought to the Valles Caldera area each year during the 1950’s and 1960’s. From five to 15 cowboys were hired each year to herd the cattle.

The preceding figures suggest that about 100 to 400 people were involved in sheep and cattle herding from year to year through much of the 20th century.

These herders had the time to carve on trees while tending to sheep or cattle. Aspen trees with their smooth, white bark provided a good surface for carving. Well over a thousand Aspen trees have been found that are carved with varying degrees of clarity. These carvings are called arborglyphs or dendroglyphs.

Dendroglyphs provide various kinds of historical perspective. The locations of carved trees help indicate where sheep or cattle actually were grazing in the Valles Caldera. The spread of trees out in the grasslands also is indicated.

Stands of uncarved younger trees may be growing several hundred feet out into what was grassland, away from more mature stands of older and larger trees that are carved. The older carved trees indicate where the edge of a meadow existed.  The carved letters themselves indicate the writing skill of the herders.

Some of the carvings are done with cursive letters, suggesting the person had practice in writing. Finally, it is possible to conduct a genealogical search of carved names. Sheep herding may have been a significant form of regional employment for young men coming from a Hispanic and farming background. Their names can be associated with villages at a distance from the Valles Caldera.

Dendroglyphs therefore give some insight into both the lives of people and trees. Unfortunately the search for dendroglyphs faces three kinds of time limitations. First, aspen trees live at most for about 150 years.

Many aspen trees that were carved therefore have died. Their carved bark has dropped away or the trees have fallen. Second, an increasing number of aspen trees are burnt as forest fires pass through different areas over the years.

Third, the bark of a tree has an increasing chance of being damaged by bear or elk as the years pass.

So what do dendroglyphs look like? The first step is deciding if a carving was actually made by a person or if something else created it. Elk eat aspen bark, taking repeated bites along a trunk. The result can be sets of parallel cuts. The symmetry implies that a person carved the tree, but it is actually the result of cutting by the two front teeth of an elk. The growth of a tree thereafter changes the shape of the cuts. 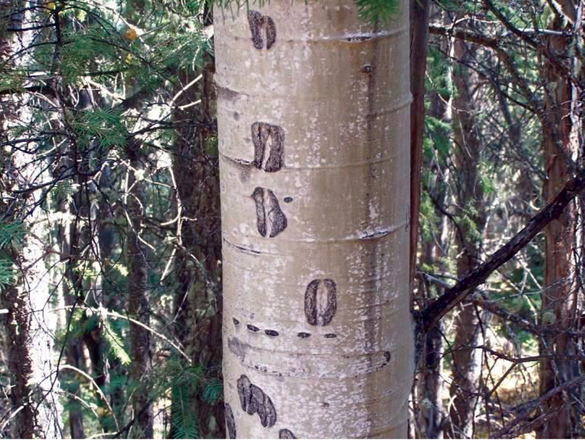 Two sets of parallel cuts over the years may lengthen and curve to what looks like some type of cattle brand that a sheep herder, logger or cowboy might have carved. Cuttings that result from an elk eating the bark of an aspen tree with its two front teeth. 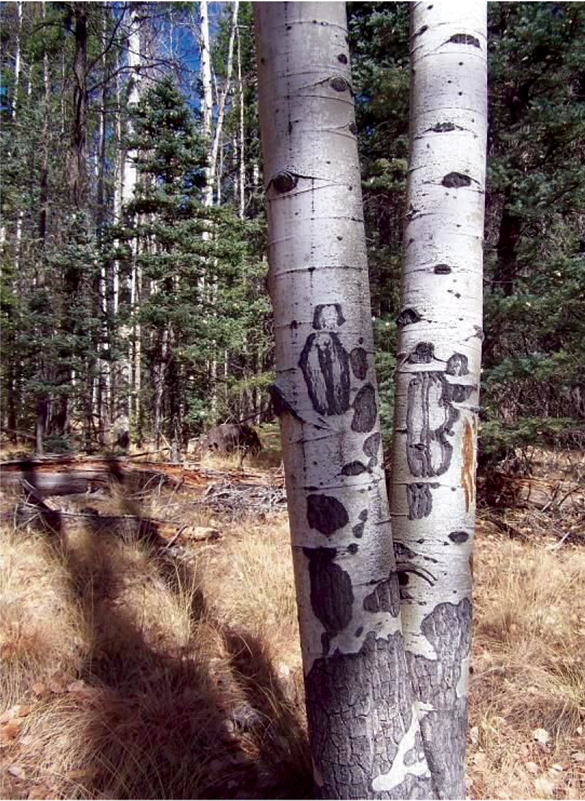 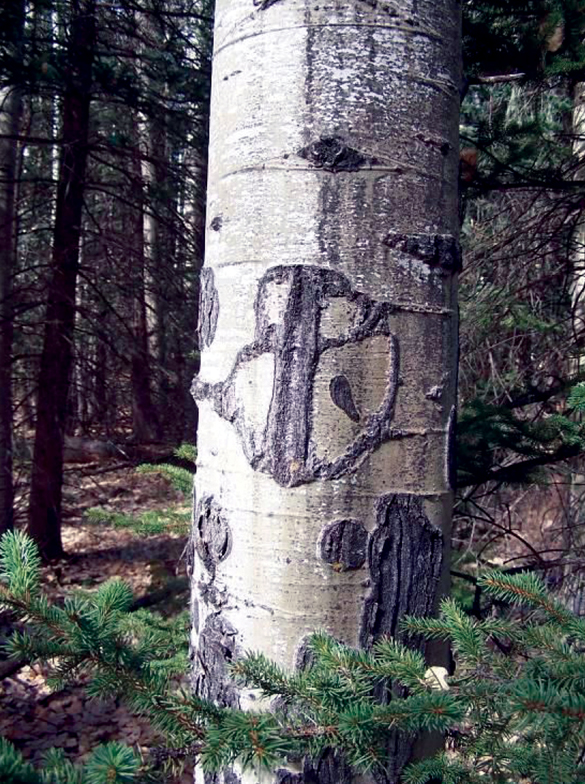 Photo by Robert Dryja
Pairs of parallel cuttings become larger and  what looks like a cattle brand carving actually is curved as a tree becomes taller and wider. The result of tree growth over the years. The side branches growing from the trunk of an aspen tree also can create symmetric images. What looks like an upside-down bird or butterfly with open wings appears after a branch falls away the trunk. 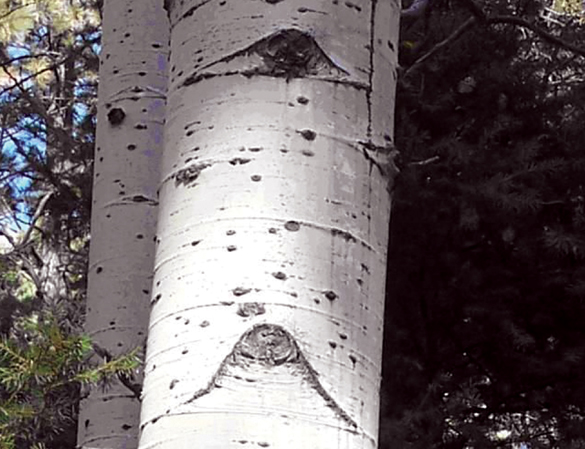 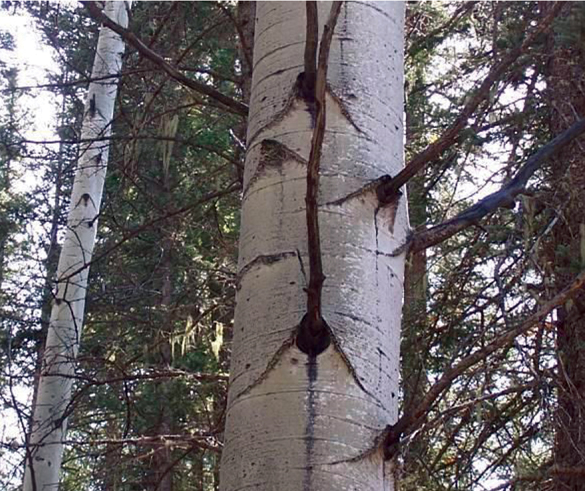 Are these carved by person?  They are so symmetric. They are actually the base where branches grow.
A true dedroglyph is a pleasant surprise when first seen.  A person’s name, a date, and name of a town may be clearly apparent, standing out from other aspen trees around it.  Initials and geometric shapes may be an alternative type of carving. 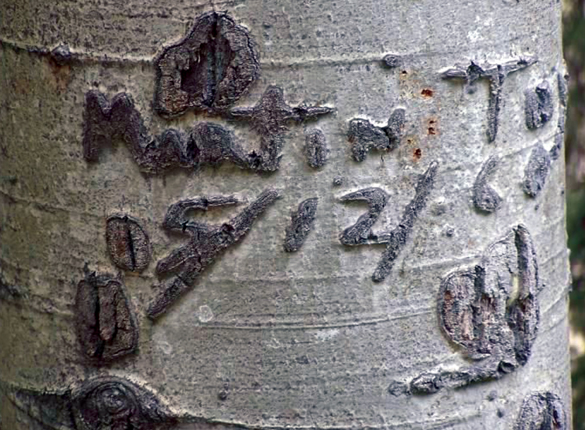 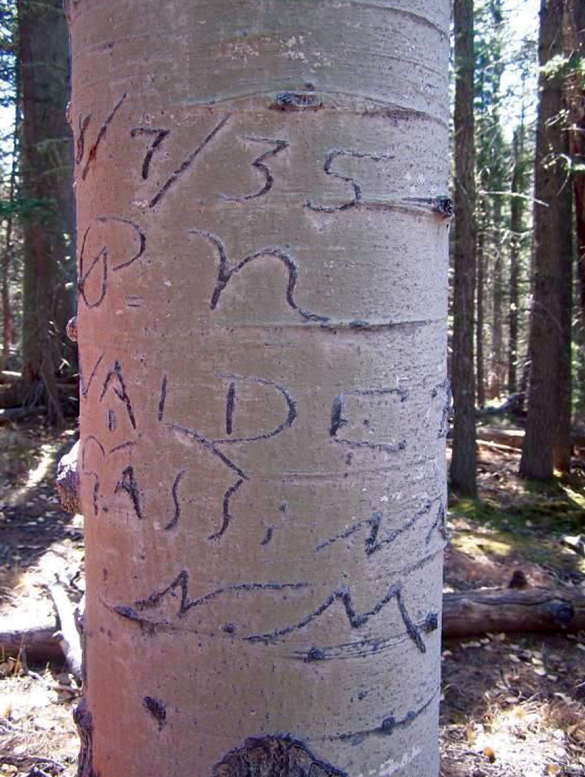 Photo by Robert Dryja
P. N. Valdez carved his name on Aug. 7, 1935 and came from Gallina. Part of the carving is done with cursive letters. Gallina was about 50 miles away if he traveled on the main forest roads back then. 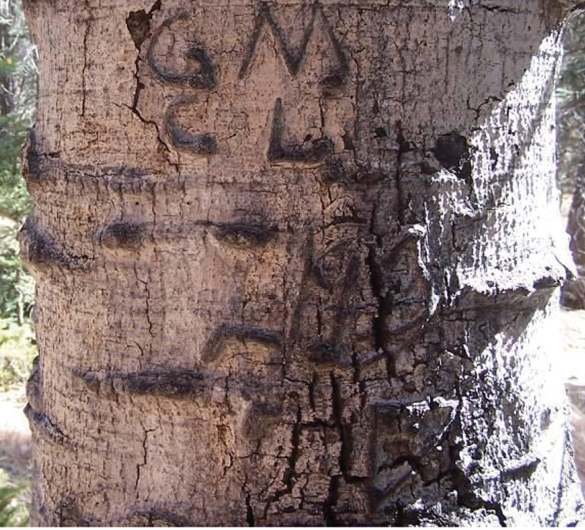 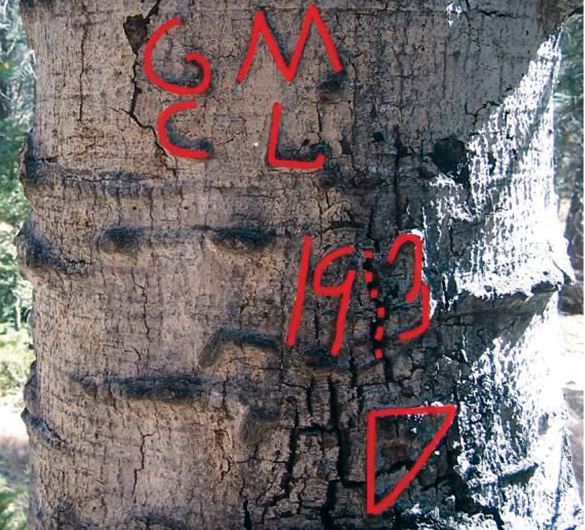 The initials G M and C L are still clear at the top of the picture and a less distinct triangle is carved at the bottom. The year 1913 may have been carved in between but is not clear. The bark of a now dead tree is falling away and only the number 19 remains. Perhaps the year 1919 would have appeared along with a person’s name if all of the bark still was present. If 1919 is correct, then the carving was done nearly a century ago. The tree already would have been fairly old in order to be large enough to be carved. An “XX” is visible below the 19 and is a mystery. 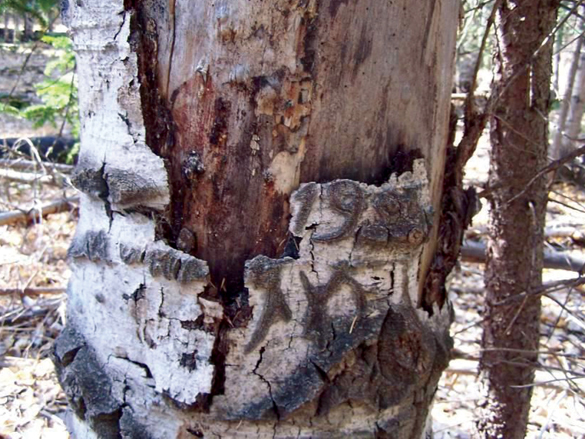