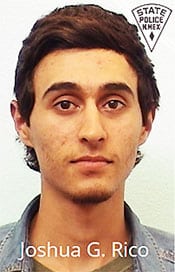 SAN MIGUEL COUNTY — The New Mexico State Police Investigation Bureau was called Jan. 23 to investigate the sexual exploitation of a child at the Pecos High School in Pecos.

During an extensive investigation, State Police agents learned Jan. 23, 2020, a 14-year-old juvenile female disclosed she had been sexually communicating via cellphone through a Snapchat App with a male, identified as Joshua G. Rico, 24, of Albuquerque who is the boys basketball coach at the Pecos High School.

The 14-year-old also disclosed Rico had asked her to send him nude photos of herself to him on numerous occasions. Through further investigation, agents learned Rico also had sent photos of his genitals to the 14-year-old via snapchat and threatened he would expose her by way of social media if his sexual demands were not met.

Agents obtained a search warrant for Rico’s cellphone for evidence. During a search of Rico’s cellphone, agents found numerous nude photos and videos of the 14-year-old female, himself and three other juvenile females who also had been victimized by Rico via snapchat.

An arrest warrant was issued Feb. 14 for Joshua G. Rico from the San Miguel County Magistrate Court. Rico was arrested Feb. 14, without incident.

He was booked into the San Miguel County Detention Center in Las Vegas, NM. Rico was charged with the following:

The names of the juvenile victims will not be released by State Police. No other information is available.