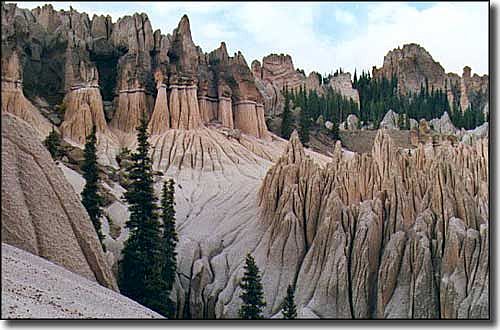 Drakos’ talk is entitled, “Soil-stratigraphic framework, timing of recent eolian events, and preservation of archaeological sites on the Pajarito Plateau.”

The record of eolian and colluvial deposition on mesa tops and within canyons indicates periods of widespread deposition during the late Pleistocene to latest Holocene (generally < 1 ka deposits).

Ancestral Puebloan sites are partially buried, and are generally in good archaeological context. In many cases Coalition and Classic Period sites can be differentiated based on soil stratigraphic relationships.

Mesa top sites are underlain by 0-1.5 m of Pleistocene and Holocene deposits recording a sequence of discontinuous soils that represent episodic eolian deposition and soil formation followed by erosion.

In canyon settings, deposits are less extensively preserved recording net erosion during the Holocene across most of the landscape. Archaic and Paleoindian sites are typically buried in mesa top settings but several sites have been exposed in excavations in good archaeological context.

Early to middle Holocene colluvial deposits locally preserve Archaic sites in canyons. The archaeological context of artifacts at Archaic sites can be affected by colluvial transport and extensive bioturbation.

Although few sites have been recorded, the presence of late Pleistocene to early Holocene deposits in many geomorphic settings indicates that the proper conditions exist for preservation of Paleoindian sites on the Pajarito Plateau.

Contact Paul Bradley at Ppbradpp@aol.com for more details and to confirm attendance.