Passover: A Celebration Of Freedom 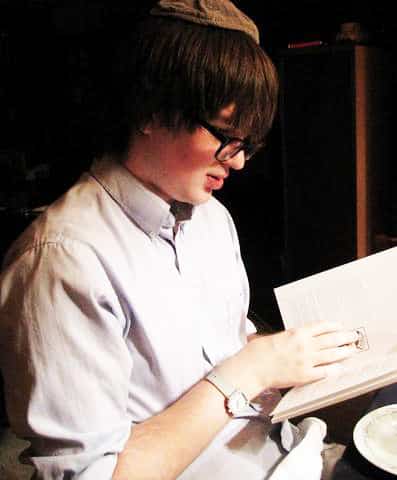 Jacob Sigeti reads from the Haggadah, containing the story of the Exodus from Egypt during a Seder meal at his home in White Rock. Photo by Carol A. Clark/ladailypost.com

Passover begins Friday at sundown. On the first two nights of the eight-day Passover observance, Jews hold a family feast and celebration, the Seder, a ritual meal that includes four cups of wine, the eating of matzah (unleavened bread) and bitter herbs and the telling of the story of Exodus.

In Hebrew it is known as Pesach (which means “to pass over”), because G‑d passed over the Jewish homes when killing the Egyptian firstborn on the very first Passover eve. It also carries the nuance of “passing over” from slavery to freedom, at least in English.

Those observing Pesach avoid any foods with leavening during the observance to commemorate the unleavened bread that the Israelites ate when they left Egypt.

Passover is an unusual holiday because it takes place at home, rather than in a synagogue, and centers around a communal meal. Often, Jews invite not only fellow Jews, but others as well to a Seder. Rather than simply listening to the story, the Seder is an experience. Participants are invited to relive the liberation from slavery and to pass on the story to the next generation.

Although the story of Exodus is a Jewish story, liberation from tyranny is part of the history of many others. Exodus also is part of the Christian tradition of course. Also, Jesus and most of his disciples were Jewish, and their last supper is widely thought to have been a Passover Seder.

The asking of questions is central to the Seder. The leader, or master of the Seder, asks at the outset, “Why is this night different from all other nights?” A series of questions and answers explain the ritual and how and why it is observed. Students are encouraged to ask questions and seek answers as part of their religious training. Questioning and seeking knowledge are an integral part of practicing Judaism. If you give an answer, you’d best be prepared to defend it!

No two families will have identical Seders. The idea is to become personally involved in the Exodus story. Here’s an example. Some feminists place an orange on the Seder plate with the ritual foods. Some may consider the orange a symbol of women’s rights, derived from a man supposedly telling Professor Susannah Heschel that “a woman belongs on the bimah [in a leadership position in the congregation, or reading from the Torah] as much as an orange belongs on the Seder plate”.

The Seder ends with the exhortation, “Next year in Jerusalem!” Some believe that this means not only to the return of Jews from the diaspora but to a metaphoric return from exile. It is a call to freedom and a renunciation of any form of slavery, internal or external.

Next year in Jerusalem!