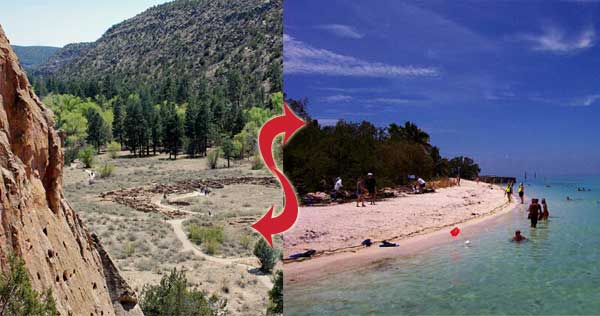 At left, the ruins of Tyuonyi Village at Bandelier National Monument and Beach Day at Dry Tortugas. Photos Courtesy of the National Park Service

In a perfect example of coincidence, Glenn Simpson, acting administrative officer at Bandelier National Monument, is preparing to leave the park’s canyons and mesas for the islands and coral reefs of Dry Tortugas, a National Park in the Florida Keys.

The coincidence continues because while at Bandelier, Clark is acting in the position that Simpson formerly possessed – facility manager.

Simpson will work as the site manager at Dry Tortugas starting Feb. 10. He started working at Bandelier in 2006. Before that, Simpson worked in the Park Service’s Santa Fe Regional Office.

Simpson started his career in the Park Service right after graduate school. He explained he is leaving the dry, dessert climate for the ocean because “it is time for me to make a change.”

Although Simpson grew up close to the water – in California – he has lived in the high desert for 15 years.

“My experience at Bandelier has provided me with the opportunity to take on leadership duties,” Simpson said.

These are skills he can bring to Dry Tortugas, a remote park needing hands-on management.

Some of his leadership skills were definitely fined-tuned during the summer of 2011, one his most memorable times at Bandelier. The summer featured a power outage, flooding in Frijoles Canyon and, of course, the Las Conchas Fire.

“That whole summer really tested everybody here at the park,” Simpson said, adding it is definitely a summer he will never forget.

During the fire, Simpson said he headed the incident management structure and was a part of Bandelier’s fire suppression team.

“I’m grateful for the opportunity to be a part of the team for response and recovery,” he said.

The fire, which is one of the largest fires in New Mexico’s history, will certainly have long-term affects on Bandelier, Simpson said.

“It will be a long time before Bandelier is operating where we are not responding to recovery,” he said.

However, the fire provided opportunities to make changes at Bandelier. For instance, the park opened a shuttle business right after the fire, which was such a success that it continued the service. Simpson said the vehicle traffic is much lower, which makes the experience at Bandelier “richer.”

Although Simpson is looking for a change, he said the new job offer would not have been possible without the support of Bandelier Superintendent Jason Lott.

Clark has also been enjoying a change of scenery during her detail at Bandelier. As the acting facility manager, Clark oversees the maintenance crew and historic preservation crew. She explained that she is currently assigned to Bandelier National Monument for four months; this may be extended an additional four months.

“It’s actually a nice relief from the heat of the Florida Straits,” Clark said, adding that it nice to see open space rather than open water.

There are aspects at Bandelier National Monument that Clark said she will be able to apply at Dry Tortugas. For instance, the infrastructure at Bandelier will allow Clark to straighten out the data processing at the Florida park

Before she returns, Clark said she is enjoying meeting all the staff at Bandelier, plus it is also an opportunity to get to know Simpson, her new boss at Dry Tortugas.

This coincidental meeting has allowed both Park Service employees to understand each other’s worlds and have greater understanding of each other, Simpson said.