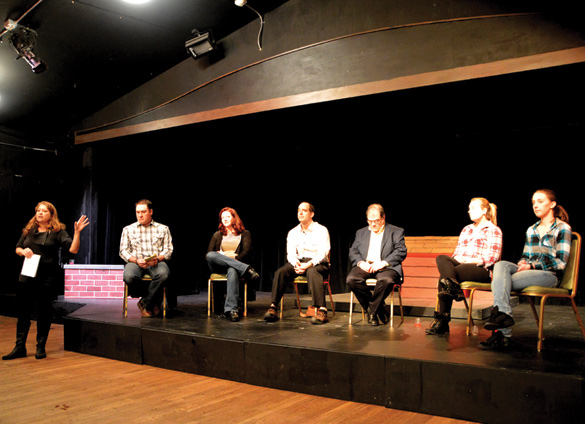 Director Milder initially chose the play because of its artistic merits, but when casting began he discovered how much the community needed to see the play, he said. “A high school student told me ‘this is what we see.’ These issues are being faced by our students and families.”

“This play may be disturbing to some, but it covers issues people in the community need to be aware of,” said Lestone, who plays Tricia. “I grew up here and the issues the play deals with really hit home for me.”

Asked if issues discussed in the play are reflected in his practice, Dr. Haigh said the play was “an entire office day in 90 minutes. We see all of these things and then some.” One issue he sees often that wasn’t reflected in the play “academic pressures unique to this town.”

Dr. Haigh commended the Los Alamos Public Schools for bringing out these issues and starting to deal with them.

McCulloch said bullying is a problem faced by kids of all ages, including elementary school students. “With males, bullying typically is overt and much more physical. With girls, it’s mean girl stuff. It’s often behind your back.”

One issue that people may not be aware of is the prevalence of the effects of rape culture, McCulloch said. “A client was raped at a party and the person [the rapist] thought it was okay to have sex with someone when they were passed out.” In a small town like Los Alamos, people are afraid to report rapes because of possible social consequences, she said.

“We need to acknowledge that these are issues in Los Alamos,” Dr. Haigh said. “My practice filled in one year, which is almost unheard of.”

Haigh said 2015 was an especially bad year, with many patients expressing suicidal ideation and some attempting suicide. He said things seem to be improving with the community focus on mental health in 2016.

Asked how to help young people cope with the stresses they encounter, Dr. Haigh stressed parental involvement. It’s important to be positive and not controlling, he said.

“We forget what it was like to be a kid,” Dickson said. “This stuff is a big deal.” Kids are dealing with issues their parents didn’t face, such as cyberbullying he said.

The panel noted some of the signs that all may not be well with a kid, including:

Teacher Chas Shay said the mental health first aid training he received through Los Alamos Public Schools has helped him to better deal with problems and potential problems students have. “Being present in students’ lives is really important–giving a high five in the hallway, being available to talk.”

“We have a tendency to pretend Los Alamos is perfect,” said Ramsey, who plays mean girl Marcie in the play. “I hope this [the play and the discussion] encourage change.”