Los Alamos science fiction writer Carolyn Neeper has been contemplating and engaging in interspecies communication for many years.

As readers of her column in the Los Alamos Daily Post, “How the Hen House Turns“ know, Neeper is deeply involved with the animals in her life, be they skunks, dogs or turkeys. It doesn’t hurt that Neeper also is a microbiologist.

“We aren’t unique in our emotional responses,” Neeper said. “We exaggerate our uniqueness. We need to appreciate more that we’re simply a part of it all.”

Neeper has watched the processes of imprinting and bonding take place in animals and their responses don’t seem that different from the human emotions that underpin our society. This involvement with the emotional lives of animals has stood Neeper in good stead as she has gone about creating the fictional world of her series of novels, The Archives of Varok.

Two of the novels are now in print and a third is coming soon, with a fourth on its heels. The novels explore how to create a sustainable society. They also delve into such questions as what constitutes a family and how interspecies communication and bonding might take place between members of different alien societies. 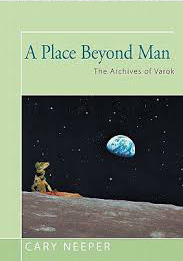 The first novel in the series, A Place Beyond Man, was initially published in 1975. It started as an experiment, just for fun, Neeper said. Scribners picked up the novel, which then took five years of rewrites to be published, then went out of print fairly quickly. (It was republished by Authors Guild BackinprintEdition in 2011.)

Neeper continued to work on the Vorak books off and on and when her daughter Shawnee offered to help with the project, she decided to go back to the series, with Shawnee as her editor. The books are published by Penscript, an independent publisher.

“I feel really good about the books now,” Neeper said. 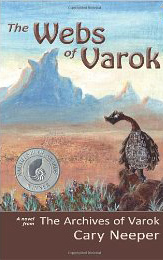 The second book in the series, The Webs of Varok, recently won the Nautilus Book Awards Silver Medal for Young Adult Fiction. I’m not really sure why Webs was put in the category of young adult fiction. Young adults can certainly enjoy it, but so can adult readers.

The Webs of Varok continues the story begun in the first novel, of microbiologist Tandra and her young daughter Shawnee, who end up meeting two alien species who have been watching humans hurtle toward environmental destruction.

Tandra forms a bond with two males, one an amphibious ell named Conn, and the other a telepathic varok named Orram, who looks very much like a human, but is very different. Varoks destroyed their own ecosystem and rebuilt their society to be sustainable.

Ells and varoks are very nearly opposite in temperament. Ells live a deeply sensual existence, usually living together in schools where they share every experience. Varoks live mostly in their minds and have trouble processing strong emotions. Tandra, Conn and Orram, along with Shawnee, end up forming a family unit and return to Varok together. This is where The Webs of Varok begins.

A main theme of The Webs of Varok is the possibility of a sustainable economic model, which is explored through a conflict in varokian society, in which the ideals that sustain their civilization are challenged.

The novel fictionalizes the ideas of thinkers such as Herman Daly and Lester Brown who have written descriptions of how a steady state economy might function.

“We worked hard to integrate the steady state economics into the story,” Neeper said. “If we’re going to convince people, a story can be powerful in changing minds.”

It’s interesting to explore how these ideas play out on Varok, but it’s the characters who keep the novels from getting bogged down with theory. By presenting three species connected by deep bonds, Neeper is able to explore how intelligence and emotion might function for other species and what it means to be a family. The Varoks form bonds based on connecting through the mind, while the Ells achieve connection through sensual bonding. Humans are somewhere in the middle.

The ideas are interesting, the characters compelling and the novels are fun to read. We can look forward to the next two books in the series, Conn: The Alien Effect and Shawne: An Alien’s Quest. Readers can expect to learning more about the Ells and their society as well as a return to earth for a look at how humans are attempting to learn from the examples of ells and varoks to build a more sustainable world.

Visit http://www.caryneeper.com to learn more about the series and read about the economic theories behind the books.