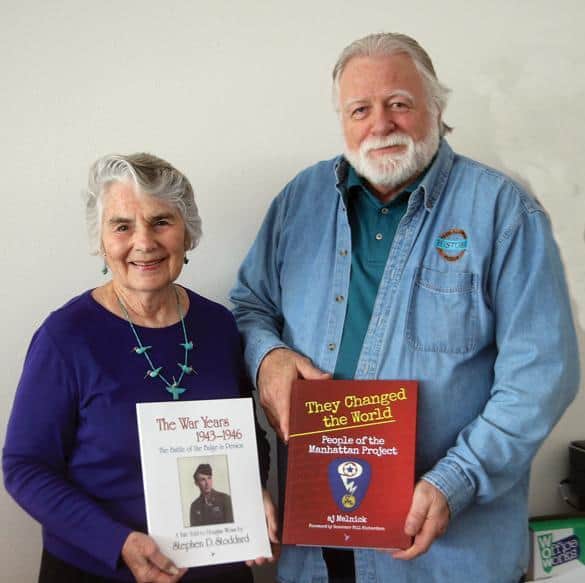 Historian and author Nancy Bartlit and graphic artist and history buff Marc Rayburn are the people behind Pajarito Press. Their latest release is They Changed the World: People of the Manhattan Project by Santa Fe author aj Melnick. Photo by Bonnie Gordon/ladailypost.com

A book signing for “They Changed the World: People of the Manhattan Project” is scheduled for 11 a.m. to 1 p.m. Saturday, May 18 at the Bradbury Science Museum.

The book is published by Pajarito Press, which is a collaboration between two history buffs, author and historian Nancy Bartlit and graphic designer Marc Rayburn. Located in Los Alamos, the goal of the press is to publish and promote well designed, high quality books in print as well as electronic formats compatible with all portable devices.

“Our books are related to the stories of military and civilian personnel who were involved in the world-changing events of World War II,” Bartlit said. “We also want to publish books and periodicals on various subjects, written by people in our region.”

The two met through the Los Alamos Historical Society, in which both are active. The two also are involved in the Historical Preservation Advisory Board. Rayburn is stepping down from that board after eight years and Bartlit is moving onto it.

“It’s a hand in glove fit,” Bartlit said. “We bring different skill sets to the endeavor. It’s not often you find people you can work with this well.”

The press has six books completed or nearing completion, Rayburn said. “They Changed the World: People of the Manhattan Project” contains book is a one-of-a-kind volume of portraits and personal interviews capture the human side of working on “The Hill” during the Manhattan project. These people were not only scientists but, also clerks, truck drivers, carpenters, and teachers—everyone necessary to create the functioning community in Los Alamos.

Pajarito Press books are printed by Art Guild Press of Santa Fe, a printer of high quality “art books.” Rayburn is impressed by the quality of the printing and has “a great working relationship” with owner Robert Erlichman.

Rayburn redesigned the interior look and the book’s cover. The pictures are clear and crisp and the hardcover book is beautiful.

Rayburn grew up in Los Alamos. He spent 15 years touring as a musician before returning to New Mexico in 2009.

Bartlit earned a BA in history at Smith College then went to Japan to teach. She met her husband, writer and chemical engineer John Bartlit on a blind date. When John’s career brought them to Los Alamos, Nancy became active in a number of projects. She and John founded New Mexico Citizens for Clean Air and Water and she served three terms on the Los Alamos County Council.

Bartlit returned to school, earning a Master’s in International Communication at the University of New Mexico. With her professor, Dr. Everett Rogers, Bartlit traveled all around New Mexico interviewing veterans of World War II, she said. The result was Silent Voices of World War II: When the Sons of the Land of Enchantment Met Sons of the Land of the Rising Sun, published in 2005. Bartlit interviewed U.S. Army survivors of the Bataan Death March, Navajo Code Talker Marine privates, Manhattan Project civilian and military personnel, and a survivor of the Santa Fe Internment Camp for Males of Japanese descent.

“I never stop searching,” Bartlit said. “People share information about their fathers and their grandfathers.”

Bartlit has made a name for herself as a speaker and has earned numerous honors and awards. She is a Los Alamos Living Treasure.

The next project for Pajarito Press is a real labor of love, the reissue of “Silent Voices of World War II”.

Bartlit and Rayburn hope for a fall release of the redesigned book. They also have a reprint of “From Calcutta With Love” by Elaine Coleman in the hopper.

Their first book, “The War Years: 1943–1946 The Battle of the Bulge in Person: A Tale Told to Douglas Weiss” by Stephen D. Stoddard, is printed on quality stock and bound in soft cover.

“This book is a rich recounting of the life of an infantry soldier during the war in Europe,” Bartlit said. “It is a captivating read—just like sitting in the room with Steve as he tells his stories.”

Visit Pajarito Press at pajaritopress.com for more information and to purchase books. Books are also available at Gadgets, the BSMA gift shop inside the Bradbury Science Museum.

Join Pajarito Press for a book signing for “They Changed the World: People of the Manhattan Project” 11 a.m. to 1 p.m. Saturday, May 18 at the Bradbury Science Museum.

Author aj Melnick will be on site to sign her newly revised and reprinted book. The book was originally published in 2006. The people portrayed in this book all worked at Los Alamos Scientific Laboratory (Project “Y”), with the exception of only a few.

In 2017, Melnick’s work was incorporated into an interactive display on that same wall, and the physical photo-portraits were reformatted enabling display of a rotating selection. In 2018, Melnick donated the negatives of the photo-portraits to the Bradbury, and they are now also part of the museum’s exhibit collections.”

This documentary series was completed over a period of about two years, Melnick said.

“The people in this series lived in Los Alamos, Santa Fe, Albuquerque, Española, White Rock, San Ildefonso Pueblo or Santa Clara Pueblo. I interviewed them in their own homes before I photographed them. It is necessary for me to establish a bond with each person I photograph to get the best portrait possible. I usually spent two hours talking with and photographing each subject. I looked for the best location in or around the home for the photographs. For the portraits, I preferred to work in the morning or late afternoon, when the extraordinary New Mexico light is most beautiful.”