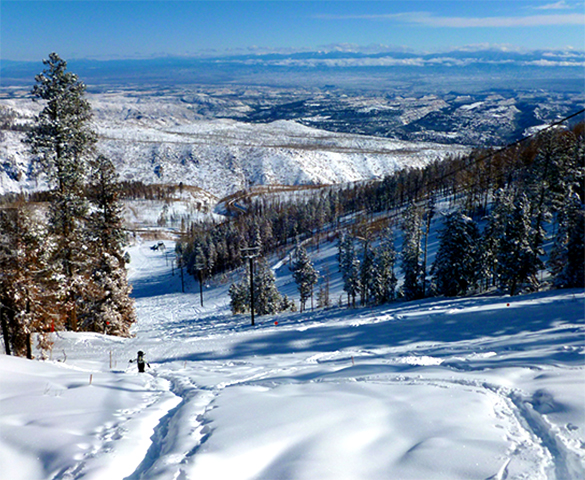 Thanks to this week’s winter storms, nearly two feet of snow have aAdropped on the mountain and resort officials announced that most of the skiable terrain will be open for powder skiing this Saturday, Dec. 19.

Two winter storms blanketed Pajarito this week with 22 inches of snow. Pajarito expects to open three lifts and 12 trails today when the ski area opens for daily operations, and Pajarito will open four lifts and 33 trails (including the local favorite “Fab Four,” which are known as being among the best bump runs in the state, as well as the new beginner’s trail, Redemption) beginning Dec. today.

Skiing Magazine, the world’s leading publication for committed skiers, featured the Los Alamos ski area in its annual Photo Annual, which showcases stunning visuals and memorable stories of ski adventures from around the globe.

“For decades, those who know Pajarito understand it’s someplace very special,” General Manager Tom Long said. “We couldn’t be more proud to know that Skiing and National Geographic understand that, too.”

Pajarito was founded during World War II and the height of the Manhattan Project by a group of scientists looking to pursue their passion for skiing. Trail by trail, lift by lift, these volunteers created one of the most unspoiled ski areas in the state. Today, the mountain is managed by James Coleman and is part of the largest collective in the region (Coleman’s southwest collection of resorts include Sipapu Ski and Summer Resort near Taos,.; Arizona Snowbowl of Flagstaff; and Purgatory Resort of Durango, Colo.), and Long says the new ownership group is committed to preserving Pajarito’s unique history. Prior to these announcements, Ski New Mexico, the state’s association of ski resorts, named Pajarito’s lift manager Paul Humphrey the best mountain operations team member in the state during its annual Ski New Mexico Hall of Fame banquet. Sipapu ski patroller Albert Graves was also named best ski patroller during the same event, too.

Thanks to the most impressive water collection effort to date, the ski area accumulated nearly 10 million gallons of water for snowmaking, and mountain crews are currently making snow to open additional terrain.