On The Job With Veronica Krupnick At CASA 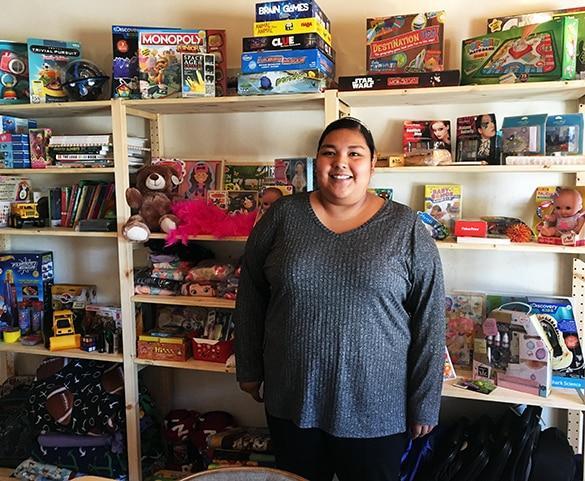 Veronica Krupnick stands in a room full of toys for kids in the foster care system at the offices of CASA First in Santa Fe. Photo by Mandy Marksteiner

Veronica Krupnick is a recent college graduate who has joined the CASA First team as a Foster Youth Advocate.

CASA First is one of the many youth advocacy programs that receives funding from United Way of Northern New Mexico. CASA First stands for Court Appointed Special Advocate, and the mission of CASA, First Judicial District is to support and promote court-appointed volunteer advocacy so that abused and neglected children in foster care from Santa Fe, Rio Arriba, and Los Alamos Counties can be safe, have a permanent home, and thrive.

“So far I love it!” Krupnick said. “It’s a new position. I have the freedom in how I want to structure my day. I just graduated; most people don’t graduate and get a job they love right off the bat.”

“It was very cool to see they were hiring. I really wanted to something to help this group whether I got hired or not,” Krupnick said. I value CASA First because they had a big impact on my life.”

Krupnick and her sister were in the foster care system in Albuquerque for 4.5 years. She said, “During those four and a half years, when I was 6 to 10 years old, we went through multiple foster homes, therapists, guardians and social workers. The only thing that remained consistent was our CASA First volunteer. We moved, and she followed, until we were finally adopted.”

The group of kids that she will be working with are 14 and up and faced with a harder situation.

“At that point in their life they understand their chances of finding a permanent place are slim. They are in and out of foster homes. Some end up incarcerated at a young age or homeless,” Krupnick explained.

Having experience in the foster care system and having survived childhood trauma and not-so-great parents, people like to say that Krupnick is a shining success story. And while that is true, she is the first to point out that she had a great deal of support.

“People like to tell themselves, about me, that I’ve had a broken traumatized childhood and that I made it,” she said. “But there are some key things that I had that these kids don’t. I was adopted by well-off, educated and determined parents. They would have given me the world. They knew of so many resources and I talked to so many therapists. I had constant support, and a family who checked up on me whether I liked it or not. People were concerned about my well-being. These kids don’t have that, or they are at risk of losing it.”

“I want to make a difference by connecting with them. I want to be a friend, not another assigned face,” Krupnick said. “What I want to do is work with the older youth as early as time allows to make sure they are as well-connected, and that they have the support they need to figure out where they want to go and help them have what they need to not only survive but thrive. That’s not possible without support. I want to be that support.”

How she chose her career path

Krupnick graduated from Fort Lewis College, in Durango, Colo., and got a degree in public health.

When she first went to school, her goal was to be a pediatric nurse. After two weeks of being in school she joined a group called the Wellness Peer Advisory Council (WellPAC) and the experience changed her mind about what she wanted to do with her career.

WellPAC is a student led health and wellness organization. Their mission is to meet students where they are with mental, physical, emotional health in a non-judgmental way. They work on projects involving suicide prevention, healthy eating, study skills and other similar topics.

“During my time there I took more of a leadership position, running the group and planning events,” Krupnick said. “I realized that I was good at program planning.”

Gaining Experience by Planning a Suicide Prevention Program in Durango

The biggest and most recent event took one year of planning. Kevin Hines is one of the few people to ever survive after jumping off the Golden Gate Bridge and is now a well-known mental health advocate.

“I was amazed by his story, but also appreciated that he spoke our language,” Krupnick said.

Most motivational speakers tell a story about a climatic event or a turning point in their lives and act as if everything is suddenly all better. It bothers Krupnick when speakers do that, because she knows life isn’t like that.

But Hines is more real and honest, which is why he caught her attention.

“He jumped from the bridge and it was absolutely horrifying,” she said. “But he doesn’t act like everything is all better. He still struggles. But now he has better tools to deal with it. The message is, ‘It’s OK not to be OK, but it’s not OK to not ask for help.’”

After realizing what a great speaker Hines is, Krupnick and fellow student Kendra Reichle decided to write a program proposal to bring him to the college. It was all a part of her senior project, interning with WellPAC.

Reaching Out to Funders

WellPAC is a student volunteer-run organization with a modest operating budget. Hines’s speaking fee was $5,000, not including the venue or any other expenses. Krupnick knew she would have to find a way to pay for it other than dipping into the operating expenses.

She went to a community meeting with leaders in the Durango health community, especially from hospitals, addiction centers, and non-profits.

“Out of luck, I showed up at the right meeting,” she said, “They were talking about suicide prevention.”

She introduced herself, talked about what WellPAC did on campus and explained how they wanted to host a suicide prevention event for Fort Lewis College featuring Kevin Hines. The entire town would be included.

After handing off her proposal, she began the waiting game… months later, she had given up.

Just before she graduated in December, the first donation came in from The Cody Project, a suicide prevention group. After that, the WellPAC donated $1,000 from their own budget and soon they had raised more than they needed, which meant they were able to make the event even bigger and rent out the concert hall.

She stuck around campus for another few months to make sure everything ran smoothly.

But, no matter how well things are planned, sometimes things go wrong. The plane carrying Hines had something wrong with it and he couldn’t make it.

Even though they restructured the event, he still gave a presentation over video. A few months later they brought him in a second time.

“The process of planning this event, reaching out to the funders and getting people to do the work was how I found out that I was interested in community health,” Krupnick said.