Olions ‘It’s A Wonderful Life: A Radio Play’ Resonates Now More Than Ever 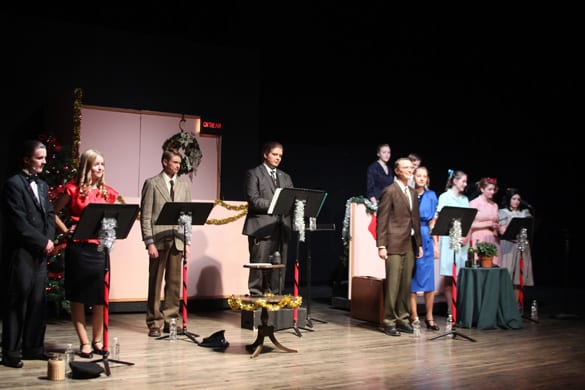 The cast of ‘It’s A Wonderful Life: A Radio Play’ on stage Dec. 8. Photo by Bonnie J. Gordon/ladailypost.com 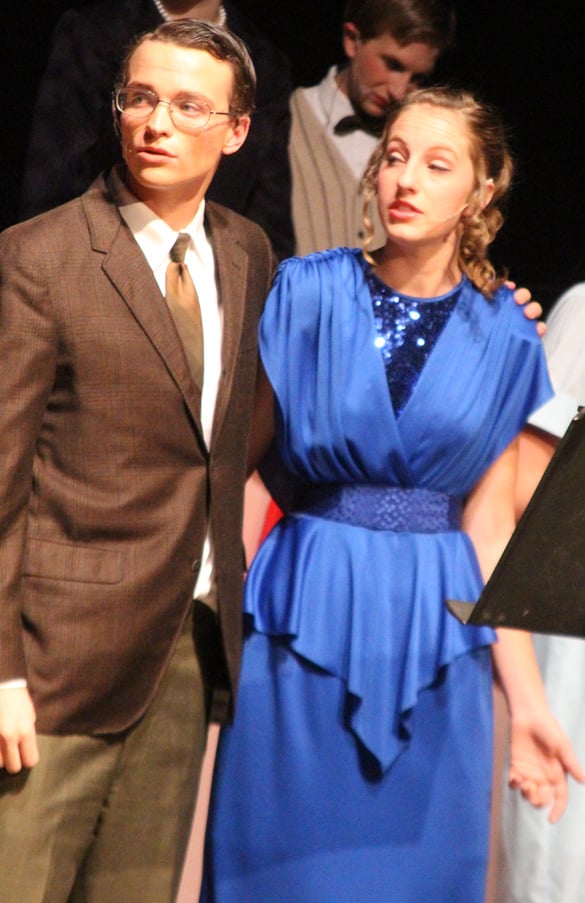 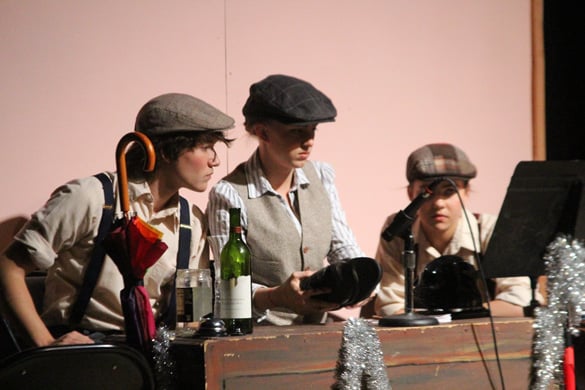 As winter closes in, the Los Alamos High School Olions production of “It’s A Wonderful Life: A Radio Play” is sure to warm your heart. Unless you’ve been living under a rock, you already know the story. “It’s A Wonderful Life” is the best known Christmas movie in the U.S. and the play version, done as a radio play, sticks close to the story.

The play takes place at a 1940s radio station, called, with a little nod to the local, KRSN. It includes some really funny period commercials.

George Bailey (Donald Poston) is the manager of a struggling savings and loan operation that has managed to bring home and business ownership to the modest income citizens of Bedford Falls. He’s deferred his dreams to keep the business alive and a final blow, the loss of $8,000, has George on the brink of suicide.

Enter his guardian angel, Clarence, (Ogden Berry) who shows George what life would have been like without him. The town and the lives of many of its citizens have been ruined. George saved his brother’s life, the career of his first boss, and as the manager of the Building and Loan, made an enormous difference for many of his fellow citizens.

Attacked by the FBI, among others, as communist inspired, in 1947, the movie version non-the-less became an enduring classic. In the current era, it’s a reminder that ordinary people can make a huge difference to those around them—and that not everything is, or should be, for sale to the highest bidder.

Laurents brings the perfect mix of unsure and strong-willed to the character of George. We’re all rooting for him. Rebekah Harkey is excellent as his wife Mary. She brings a spunkiness to Mary, who could be too good to be true. I loved Berry as Clarence. He captures the little boy quality that makes Clarence so endearing and lovable.

The rest of the cast plays multiple roles and everyone does a good job. Eben Bold, Hans Archbold and Olivia Taylor are standouts.

A special shout out goes to the sound crew of Josh Vigil, Cameron Harlow and Leander Murphy for a great job with the sound effects. All the technical aspects of the show are excellent.

Go see this show. The young cast deserves lots of support and the play is sure to warm you right down to your toes.

You have four more chances to see it, at 7 p.m. Friday and Saturday and 2 p.m. Saturday and Sunday in the Blackbox Theatre at Los Alamos High School. The theatre is downstairs in the main building.