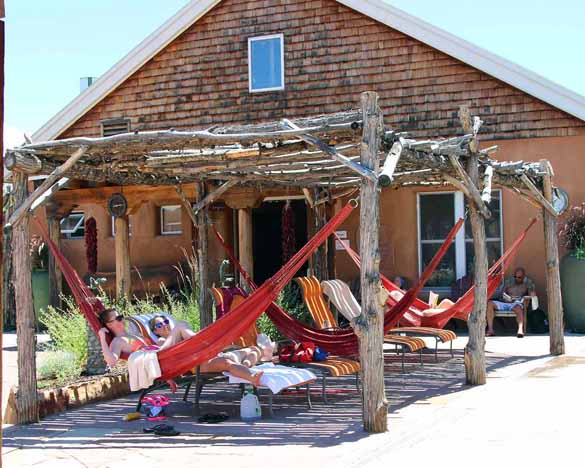 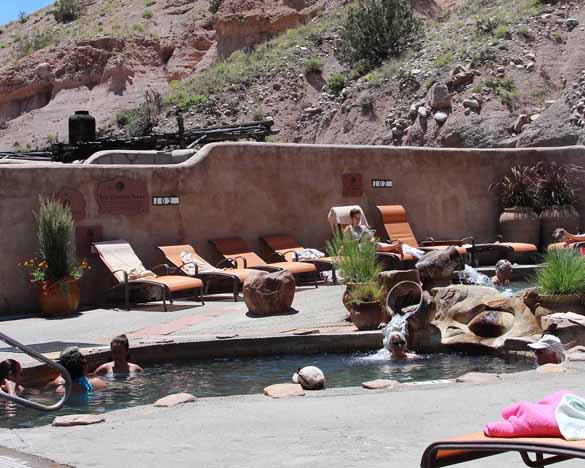 Ojo Caliente Mineral Springs Resort & Spa at 50 Los Banos Dr., Highway 414 in Ojo Caliente is celebrating 147 years as one of the oldest natural health resorts in the U.S.

Steeped in myth and legend, these ancient springs have been a gathering place and source of healing for thousands of years. The use of the waters can be traced back to the earliest human migrations in the region.

Ancient peoples, the ancestors of today’s Native American Tewa tribes, built large pueblos and terraced gardens overlooking the springs. Surrounding the springs are the ruins of the cities populated before the birth of history.

Posi or Poseouinge, “village at the place of the green bubbling hot springs” was the largest of four Pueblos surrounding the springs and home to thousands of people.  Because of the work of archaeologists Adolph Bandelier and Edgar Hewitt, it’s known that Posi was a vibrant center of activity until the 15th century.

The unusually diverse and abundant styles of pottery shards and other artifacts remain as a testament to Posi and the spring’s long-standing iconic significance within the larger region. Tradition tells us that often-warring tribesman would set their weapons and differences aside to gather in peace at the springs to enjoy the benefits of the waters, and to trade and heal their wounds and ailments without conflict.

In the 1500’s, the Spaniards in their quest for gold and the Fountain of Youth, also discovered the springs. The first explorer’s record cites, “The greatest treasure that I found these strange people to possess, are hot springs which burst out at the foot of a mountain… so powerful are the chemicals contained in this water that the inhabitants have a belief that they were given to them by their gods.

These springs I have named Ojo Caliente” (literally translated means “warm eye”, but more commonly known as “hot spring”). After discovering Ojo Caliente’s springs and the lush and fertile surrounding river valley, the Spanish were challenged in their attempts to colonize the area and cultivate the land throughout the 17th and 18th centuries.

Those attempts repeatedly resulted in the settlers retreating back to the more established and safer settlement of Santa Fe, as result of routine raids conducted by the Comanche and other hostilities. One can still see the old “gun portholes” in the walls of Ojo Caliente’s original Santa Cruz church (constructed in the late 1700’s) that the Spanish settlers used to defend themselves.

It was not until the 19th century that westward expansion caused Ojo Caliente to emerge from its prehistoric origins.

In 1868, Antonio Joseph, New Mexico’s 1st Territorial Representative to Congress, built the first bathhouse and Ojo Caliente Mineral Springs became one of the first natural health resorts in the country.

Ojo quickly became a hub of activity providing the mineral waters, overnight lodging, a Post Office, and a general store where historical ledgers show Kit Carson frequently purchased supplies. As a “sanitarium”, Ojo was known throughout the country as a place where thousands of people were cured each year through the healing effects of the waters and the earth.

Three original buildings have been caringly restored and maintained and today are listed on the National Registry of Historic Places, including the Historic Bathhouse built in 1868; the Historic Hotel, built in 1916; and the Adobe Round Barn built in 1924.

The famous and the infamous have enjoyed these legendary waters and volumes of testimonials filled with declarations of miracle cures abound.

Generations continue to make the pilgrimage to Ojo Caliente Mineral Springs to enjoy the unique combination of four different sulfur-free mineral waters: Lithia, Iron, Soda and Arsenic, with more than 100,000 gallons a day steaming to the surface revitalizing those who soak in them.

Ojo Caliente is a legendary oasis healing body, mind, and spirit naturally for countless centuries. It is a unique legacy that lives on today. 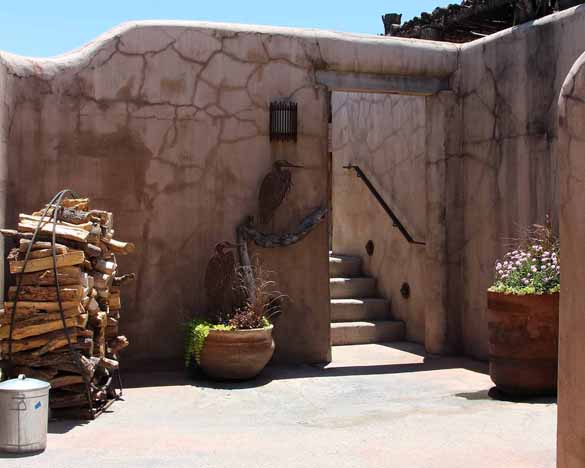 Entrance to a private tub at Ojo Caliente. Photo by Leah Austin 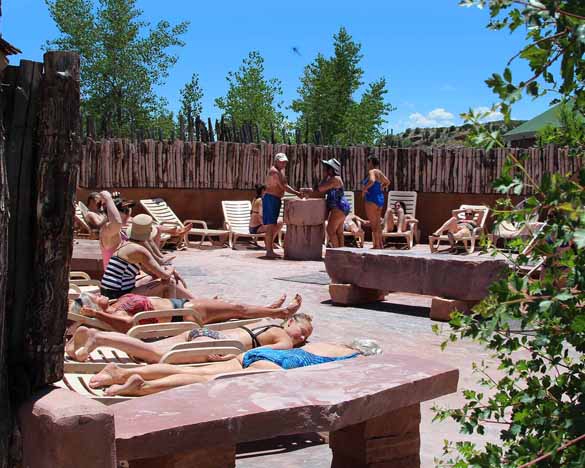 The mud pool at Ojo Caliente. Photo by Leah Austin