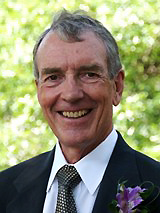 William “Rob” Oakes, 70, a resident of Placitas, died unexpectedly as the result of injuries sustained in a bicycle accident Saturday, May 11, 2013.

Rob was preceded in death by his parents William Robertson and Josephine Oakes. He was born in 1942 in Bradford, Pa., and graduated from Los Alamos High School, Class of 1960. Rob obtained his Bachelors and Masters Degrees from UNM and it was there he met Maureen and they were married on June 9, 1968.

Rob worked for Los Alamos National Laboratory until his retirement. He was an avid bicyclist and was a member of the New Mexico Touring Society. He served on the Water Board for North Ranchos de Placitas for the past eight years. Rob loved model railroading and his 1965 Mustang. He was a loving husband, father, brother and friend and will be deeply missed by all who knew him.

Cremation has taken place and a Celebration of Rob’s Life will be held at FRENCH – Lomas at 2 p.m. Saturday, May 18, 2013, followed by a reception. Should friends desire, memorial contributions may be made to National Alliance on Mental Illness, Albuquerque Affiliate, 2501 San Pedro NE, Suite 212, Albuquerque. NM 87110 or www.nami.org/sites/albuquerque.