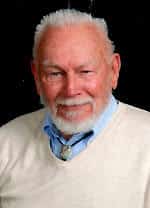 WILLIAM HYLAND CHAMBERS July 30, 1922 – July 16, 2018
William Hyland Chambers, long term resident of Los Alamos, New Mexico, and known to family and friends as Bill, died following a lengthy illness on Monday, July 16, just two weeks shy of his 96th birthday.
Born July 30,1922, in St. Louis, Missouri, Bill spent his childhood in White Plains, New York. Class of 1943, he attended Cornell University and graduated with a Bachelor of Arts in Physics.
Recruited for the Manhattan Project, he chose to honor his ROTC commitment and entered the US Army in 1943. He served from 1944-1945 as a First Lieutenant Field Artillery Liaison pilot in the 5th Infantry Division, Third Army, European Theatre. His actions during combat earned him a Distinguished Flying Cross, a Bronze star, an Air Medal with five oak leaf clusters and four ETO campaign medals.
Following the war, Bill earned an M.S. in 1948 and a Ph.D. in 1950 both in Physics. Research during his graduate studies at Ohio State produced work on nuclear gyro magnetic ratios, a technology applied today in Magnetic Resonance Imaging (MRI).
In 1950 he began working for the Los Alamos Scientific Laboratory. He was instrumental in the Laboratory’s development and design of nuclear and thermonuclear weapons; of instrumentation for nuclear test detection including the VELA satellite program; and of verification technology used for strategic arms control and nuclear non-proliferation. He had a key role in the implementation of safeguards and emergency responses to nuclear accidents including the Palomares and Thule incidents, and was a founding member of the Department of Energy’s nuclear emergency search team.
In 1982 Bill retired from LANL as the Deputy Associate Director for Defense and Safeguards Technology, and received the Distinguished Associates Award from the DOE. He continued to consult with LANL, Sandia National Laboratories, Lawrence Livermore Laboratory, EG&G, and the DOE until 1998.
After WWII, Bill’s passion for flying continued as a Commercial pilot and Flight Instructor in aircraft, instruments and gliders, and helped coordinate the construction of Espanola’s airport. An avid skier and member of the Los Alamos Ski Club for over fifty years, he volunteered his services for several leadership positions and for ski patrol duties at Pajarito Mountain and Santa Fe Ski Basin. Bill’s commitment to service also revealed itself in his engagement in leadership positions over his 50 years of membership at the United Church of Los Alamos.
He is preceded in death by his first wife Dr. Marjorie Bell Chambers (1923-2006), and is survived by his wife Peggy McCulloch Chambers; his adult children, Lee Virginia Chambers of Boulder, CO, William Bell and Margaret Chambers of Sandia Park, NM, Leslie and Albert Trujillo of Palo Cedro, CA, and Kenneth Carter and Masako Chambers of Honolulu, HI; his eight grandchildren and five great-grandchildren.
A memorial service will be held at 3 p.m., Saturday, July 28 at the United Church in Los Alamos, New Mexico. Interment will be in the Santa Fe National Cemetery.
Menu
LOS ALAMOS