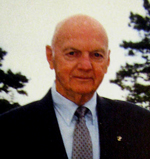 William A. Hudson died peacefully at home on September 11, 2015.

Born New York City in 1925, Hudson joined the US Marine Corps in 1943. He was awarded the Bronze Star and Purple Heart for action on Iwo Jima. After WWII he received BS and MA degrees in health and physical education from New York University.

Hudson came to New Mexico in 1949 and taught in the Los Alamos Public Schools for 33 years as a physical educator, swimming and cross country coach. After he retired from teaching, he had a successful career as a financial consultant with Waddell and Reed.

Always an athlete, Hudson competed at the local, state and national level in the Senior Olympics in swimming, track and field, triathlon and weightlifting.

A lifelong learner, besides physical fitness activities, his interests included lecturing on World War II and military history, and supporting a small library in Abiquiu.

A memorial service will be held October 24th, 2015 from 11:00 to 3:00 at Fuller Lodge. In lieu of flowers, donations to the Wounded Warriors would be appreciated.