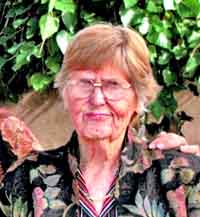 Pat was born on October 5, 1922, in Eason, Oklahoma where she lived with her brother and several half-siblings. Growing up she helped with the farm and studied hard in school. After graduating high school, Pat supported the war efforts by training and becoming certified as a riveter for war planes. Combined with her natural red hair, one could say that she was an original “Rosie the Riveter”.

Pat met Felix “Mose” Day and they married in 1943. In the same year that the couple welcomed their daughter Loretta “Jean”, the new family traveled in their 20-foot trailer to different parts of New Mexico and eventually settled in Los Alamos as it opened in 1946. Their son Robert Dean “Bob” was born in 1949 in Santa Fe.

Pat loved God, her family, and her many friends. She also loved playing card games and dominoes, watching professional baseball and the Dallas Cowboys, staying fit, and just generally living life. She was the kind of person that never sat down. She was always looking for fun things to do, working hard at home or helping others.

Pat was very involved in the First Baptist Church after joining in the early 1950’s. She sang in the choir, was the Sunday School secretary, and even folded bulletins into her early 90’s. Her final church days were spent attending Crossroads Bible Church in Los Alamos. The last few years of her life Pat was blessed to have been provided excellent care at the Sierra Vista Dementia Care Facility in Santa Fe, NM.

Pat was always a fun person to be around – she was quick to laugh at a joke and at herself, and always had a great attitude no matter what was going on. She was loving, friendly, and kind. She will be deeply missed by her children, grandchildren, and great-grandchildren.

Pat was preceded in death by her husband, Mose, who died in 2006. She is survived by her daughter Jean (Gene) Stark and son Bob (Patty) Day, eight grandchildren, and three great-grandchildren.

Donations may be made in Pat’s name to the Wounded Warrior Project (supportwwp.org/wwp), the Billy Graham Evangelistic Association (billygraham.org), or the Memory Care Association used by Sierra Vista Dementia Care Facility in Santa Fe, NM.