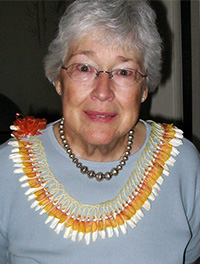 It is with great sadness that the family of Theresa “Terry” Ellen Glascock (Starkey) announces her passing on February 26, 2021 after a brief illness.

Terry was born to Colonel Benjamin and Carrie (Carter) Starkey in Honolulu, Territory of Hawaii on October 27, 1934. Because her father was in the Army Air Corps, the family moved frequently throughout her childhood, finally settling in Albuquerque, NM.

Terry graduated from St. Mary’s High School in 1952. She then attended the University of NM where she graduated with a bachelor’s degree in Education in 1956. Upon graduation she taught first grade at Eubank Elementary School in Albuquerque for a year. In 1957 Terry moved to Los Alamos, NM with her then husband, Robert “Breck” Glascock where she raised four children.

Once her children were in high school, Terry went back to school to follow her call to nursing. After two rigorous years she graduated from the College of Santa Fe in 1977. Upon graduation, she began her career at the Los Alamos Medical Center on the Obstetrics Unit. She then transferred to the Medical Unit where she stayed until she retired.

Terry’s calm demeanor and expertise led many graduates to seek her out as a mentor, including her two daughters. She cared for many in the community and Northern New Mexico during her tenure as a nurse, treating each person with dignity, kindness, and respect until retiring in 1999 after 25 years at the hospital.

Terry’s education degree served her well as a catechism teacher to many of the youth at Immaculate Heart of Mary Catholic Church during the 1970s.

She loved to cook; there was not a cookbook that she did not savor, testing many recipes out on her lucky family. She was also an avid reader and said her books were her friends. As a result, she was well educated on the issues of the day. She enjoyed traveling, especially to see her grandchildren in Colorado and Minnesota.

Her Granddaughter, Reese, said she was the spunkiest, most witty individual that she had ever met and that she had a heart of gold. She loved her grandchildren who were the light of her life. Her daughter-in-law, Stephanie, summed up all our thoughts well. Terry was a student, patient, a friend, full of joy, and one who dispensed sensible advice with a twinkle of humor in her eye. She was a strong woman who sacrificed much for family. Her faith was very important to her. Her wisdom, kindness, and thoughtfulness were an inspiration to us all. Her smile and sense of humor will be very missed. Her passing has left a big hole in our hearts.

In lieu of flowers, donations can be made to Terry’s favorite charities, St Jude’s Children’s Hospital or the Hemophilia Foundation of New Mexico.