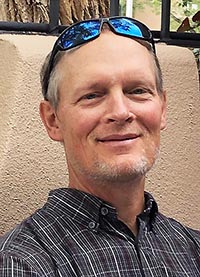 Terrance Michael (Terry) Vergamini passed away Nov. 20, 2022 after a courageous battle with cancer.

Terry is survived by his wife Catherine Mahan Boyd, his mother Peggy Gautier, his stepmother Nora Haskins and by members of his extended family as well as friends and co-workers.

He was preceded in death by his father Phil Vergamini, his brother Tony Vergamini and his stepfather Jim Gautier.

Born in Superior, Wisconsin Sept. 25, 1965, Terry moved to Los Alamos with his family in 1971. He graduated from Los Alamos High School in 1983, attended New Mexico State University in Las Cruces earning a BS Degree in biology in 1987 and received a Master’s Degree in Health Physics in 1988 from Colorado State University. After graduating, Terry moved to the Jemez Mountains where he lived for over 25 years before moving to Santa Fe.

Terry had a fulfilling 30-year career at Los Alamos National Laboratory as a Health Physicist. He was a well-respected technical expert in radiation protection, an outstanding mentor and received many awards throughout his career.

As a child, Terry loved skiing at the Pajarito Mountain Ski Area and continued skiing into adulthood. While attending college, he worked as a rafting guide during the summers and his passion for the outdoors and the rivers endured throughout his life with many whitewater kayaking adventures. Terry and Catherine continued to explore the outdoors together with their four sweet dogs Renfro, Hettie, Sylvie and Lollie on many hiking, camping, cross country skiing, and water adventures.

Terry hiked 64 peaks the year before his death. He had incredible map reading skills and could find ways into wild and remote places. He was a keen observer of the natural world reflected in his many beautiful photos of flowers, sunsets, mountains and the moon. He could find wonder wherever he went in the small details, such as a bird nest in his back yard or in the bounty of his prolific garden. Terry was an excellent golfer and had the opportunity to attend the Masters in 2022, which was a dream come true. Terry was gentle, quiet, contemplative, thoughtful, reliable, steadfast and kind. He will be greatly missed by all who knew him.