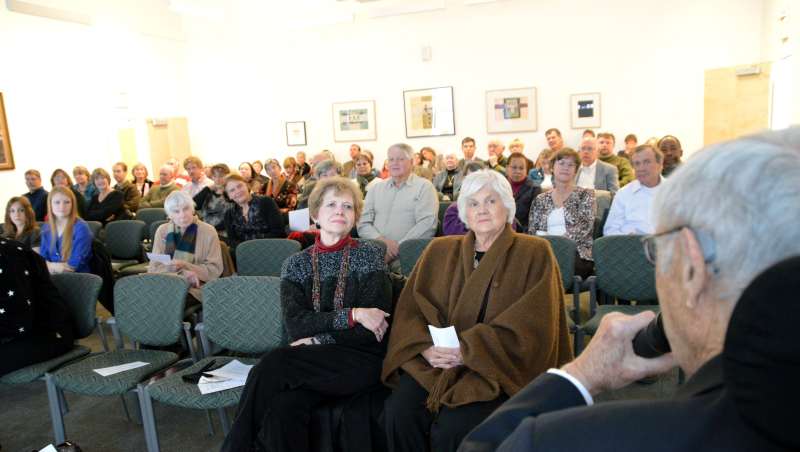 Born in Everett, Washington on February 8, 1925 to Albert and Mary Louise grew up in Gales Ferry, Connecticut with his father and ‘Grandmother’ Bess after his mother died when he was 7 years old. His primary education was in a one room country school house where eight grades were served by one teacher. Upon graduating from high school in 1943, Steve joined the Army with the promise of a college education.

After completing infantry basic training he went to the College of Puget Sound in Tacoma, Wash., until December 1943 whereupon he was called into active duty with the 11th Armored Division under General George Patton’s 3rd Army. As a platoon Sergeant, Steve fought in the ‘Battle of the Bulge’ and was wounded, later receiving the Purple Heart, Bronze Star and the coveted Combat Infantry badge. When fighting had ceased, he was transferred to the 4th Armored Division and commanded a guard unit as a Staff Sergeant trying to keep the peace in the displaced persons camp in Linz, Austria.

Upon returning to the States, Steve enrolled in the Connecticut College for Women before entering the University of Illinois. He enjoyed the summer where the enrollment was 40 men to 300 women! While earning a BS in Ceramic Engineering at the University of Illinois he met and wed Joann Burt, his first wife in 1949. After his graduation in 1950, his first job was in Golden, Colo., with the Coors Porcelain Co. Steve spent three years there before applying to the Lab in Sandia, NM and Los Alamos National Laboratory (LANL) to get more applied technical ceramics exposure.

Supposedly the job at Los Alamos was for only two years, however, he spent the next 61 years of his life there. Steve’s career was in material sciences where he worked with the CMB-6 group at LANL for 29 years. During his career he received seven U.S. and International Patents and was the author of 35 technical papers. In 1976-77 he served the American Ceramics Society as its President and in 1987 was given the Distinguished Life Member award from the Society.

Upon arriving in Los Alamos, Steve claimed that he would not get too involved at first, but that didn’t last long. He got involved with the Republican Party and was elected Vice President of the Young Republicans in New Mexico in 1952. He was invited to join Kiwanis at the same time and was a 61-year member, serving as Club President and Lieutenant Governor. In addition to these activities, Steve conceived of and started the All Sports Banquet and Los Alamos fireworks display that many have enjoyed over the years. A member of Trinity-on-the-Hill, Steve has served on the vestry a number of times. He was also instrumental in helping the Elks build their lodge.

As a matter of fact if an organization was in need, he was either a member or a huge supporter. Those that reaped from his generosity were the VFW, American Legion, Girl Scouts, Boys Scouts, Los Alamos Visiting Nurses, Los Alamos Education Group, Nature Conservancy, Chamber of Commerce, Friends of Bandelier and a founder of Los Alamos Public School Foundation. He took great pride in being a Mason and Shriner for over 60 years.

Steve’s long distinguished career in politics began with a “landslide” victory of 11 votes for Justice of the Peace in which he served three successive terms, then one term as Municipal Judge. He served a term on the last Los Alamos County Commission during the time period when the Atomic Energy Commission was preparing to sell government homes to Hill residents. He served on the County Commission, which passed the Charter and converted the government to a council form of government. After retirement from the Lab in 1980, Steve was persuaded by long time friend Senator Pete Domenici to run for the State Senate District 23 covering Los Alamos/North Santa Fe counties and later the eastern half of Sandoval County. He was successful in his first attempt and served the people of Los Alamos and surrounding counties for three consecutive terms, ‘retiring’ from the Senate in 1992.

While serving during that time, Senator Stoddard was the principal sponsor of 42 bills. Actually retirement isn’t in Steve’s vocabulary. Since then he was appointed by President Clinton to be one of the first Trustees of the Valles Caldera National Preserve and served as Vice Chair on that board from 2000-2003. The board was charged with the duty of determining the usage and development of the preserve. They were also charged to make the Valles self supporting by 2015.

A man for all seasons and a friend to all, Steve will be missed by the community he lived and served as well as his loving family. He lived by the credo “don’t ever consider yourself “better” or “above” anyone else, and similarly, remember there is no one “better” or “above” you either.” He was proceeded in death by his parents; and first wife, Joann Burt Stoddard. Stephen is survived by his loving wife, Barbara Leverett Stoddard; and loving daughters: Dorcas S. (Robert) Avery and Stephanie S. (John) Martin and loving step children Carolyn E. (Larry) Willetts, Diana J. (Frank “Pancho”) Sena, and Stephen T. (Yancey) Seitz; grandchildren: Anthony (Crystal) Trujillo, Kimberly (Jonathan) Tabor, Caroline Seitz, Stephen Avery, Nickolas Willetts, Sarah Seitz, and James Avery; and four great-grandchildren.