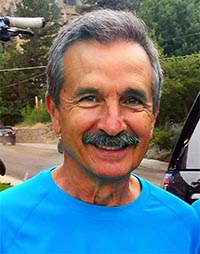 Stan had a life well-lived. He loved and was loved. He discovered his passions and purpose. He shared it with others.

He was born in Summit, NJ, to John and Irene Primak, and grew up in Basking Ridge, NJ, alongside his younger brother, Steve.

In high school he met Joan, and it was there and then that their lives became one. They had their first daughter at 17, married at age 20, packed their bags, and headed west. Fort Collins, CO was home for six years and where Stan and Joan grew their family. He painted and wallpapered his way through college at CSU, earning both his BA and MA in Industrial Arts Education. The camping, hiking, and biking bug had bit Stan and took over family weekends and vacations.

With a teaching degree in his pocket, Stan and his young family moved to Los Alamos in 1979. Here he began his career as “The Auto Shop” teacher. He managed to meticulously reorganize the entire shop and took pride in having an elective be as challenging as an academic class. Kids were surprised to learn that they actually had to work hard to pass his class!

During this time, Stan, Joan, and the girls spent all of their spare time outside, where a love affair with the mountains only grew stronger. Many lifelong friendships were formed, usually with other teachers and their families. Family camping trips, potluck dinners, exploring the high country, and teaching became a way of life.

After a change of station for one year in Moscow, ID, Stan almost earned his Doctorate in Educational Administration. It was at this time he truly found his purpose and it was definitely not an office job. He knew that he was meant for hands-on work. Heading back to Los Alamos, Stan developed a love and devotion to his community, which lasted the rest of his life. The place itself, along with the people who lived there and in surrounding communities, became extended family.

Stan began teaching Los Alamos High School Building Trades in 1983 and found passion in sharing hands-on learning with hundreds of students over many years. He developed a unique program for the school – a nonprofit organization – which purchased a lot every summer and in the nine month school year to follow literally built a house from the ground up with students mastering the trade. The homes were exceptional and always sold at market rate, with profits back into the program and the school.

Stan’s summer vacations and spring breaks were spent buying and selling fixer-uppers (supplementing his teaching income and encouraging his daughters and some students to learn construction), volunteering his time and skills to build homes in Mexico through local church-led high school trips, and finally leading his family on bicycle and camping tours to many magnificent places including the San Juan Islands, Nova Scotia, the coast of Maine, British Columbia, Banff and Jasper, the coasts of Oregon and California, and the high country of Colorado.

After teaching for many years, Stan formalized his own business, building homes in Los Alamos apart from the schools. Joan soon joined him in this venture, and they continued for the next 20 years. He refined his skills and developed new ones. He relished hiring former students as sub-contractors. Stan’s legacy can be seen in the hundreds of homes in Los Alamos that he built.

While running a business, Stan found time to enjoy life in his community through helping others. He served on numerous boards locally – county, school, business, and nonprofit. For several years he was the lead on many Habitat for Humanity homes, which brought him great satisfaction and renewed his love of building.

Stan loved life. To him it was a trip. He would wake up each morning, ready to go. Pack your bags (or tools), take the old road (in a Volkswagen bus), turn on some new music, meet some everyday people, put your hands to work, then go home to family and friends. Stan the man.

A celebration of Stan’s life will happen this summer, likely in July, somewhere outside, someplace beautiful, with new music, some everyday people, some family and friends, in the place he called home.

Stan is survived by his wife of 50 years, Joan, his daughters, Maribeth and Chelsea, his brother Steve and wife Karri, son-in-law Scott, and grandkids Joe, Gianna, Tanner and Sam. He is preceded in death by his daughter, Jenny.

In Stan’s memory, please consider donating to the Association for Frontotemporal Degeneration.