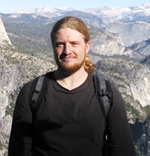 Simon Raistrick died on March 1, 2015, of a drug overdose. He had been struggling with addiction for some years.

He was born April 27, 1980, in California, but spent his childhood in Los Alamos, NM, with frequent summer trips to England, where his father is from, as well as trips to New Zealand, France, and Greece. This awakened the travel bug in Simon.

He formed close friendships in his kindergarten class at Barranca Mesa School … friendships that have lasted all his life.

He became an avid reader at a young age and was a wonderful hackysack and soccer ball juggler as well as a gifted speller, winning the County Spelling Bee four years running. He was a National Merit Scholar and attended UCSB, majoring in Computer Science. It was there that his circle of friends increased and it was these friends that joined him in a treasured yearly gathering at the Big Sur home of his mother’s family.

It was also in college that he became very drawn to music and began studying guitar, both acoustic and electric. He had an uncanny memory and understanding of music and this led to his interest in audio engineering, which he pursued at the Art Institute of San Francisco and where his skills were in great demand among the students majoring in film. During this past fall he was the sound editor for a movie filmed in the San Francisco Bay Area.

Simon had a love of Japanese culture from animated movies to language and he filled notebooks with neatly written kanji. Friends of Simon talk about his warm and gentle spirit, his generosity, and his sense of humor, especially with language. His smile was amazingly contagious and conveyed a love for the oddities and eccentricities of this world. He was kind and had a deeply satisfying hug. He enjoyed life and being out in nature and was fond of red chile, Indian food and candy like no other. There was, however, a restlessness in Simon that drove him to push limits. This led to his struggle with addiction.

Simon is survived by his parents, Ian and Darien Raistrick, by his aunts, Jory and Heidi Hopkins, his uncle, Kip Hopkins, his girlfriend, Shannon Krone, and his many friends, including his new friends at Good Morning Carmel, and in particular, Noah Shumpert, who gave him such wonderful support over the past two years. For anyone wishing to make a donation in his memory, we suggest Beacon House, in Pacific Grove, CA. The home website is http://beaconhouse.org/ and the donation page is http://beaconhouse.org/donations/tribute-gifts/ .

The family plans a private ceremony. A memorial website for Simon has been established by the Paul Mortuary here.