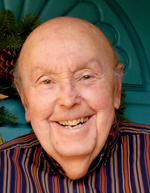 Sidney Singer, a man of extraordinary persistence when confronting problems, scientific and otherwise, died on November 24, 2016 at his home in Santa Fe.

Sid was born in Detroit on November 19, 1927, to Polish immigrants Freda and Simon Singer. He graduated from Wayne State University in 1951, then got his PhD in nuclear physics and mathematics at the University of Illinois in 1957. He had already been a summer employee at Los Alamos National Laboratory, and upon graduation he joined LANL for a career of 40 years. He retired in 1994 to attend to the health of his wife Magdalene, who died in 1998.

While at LANL he made significant contributions to the nuclear weapons test program, the Rover nuclear rocket program, the Vela satellite program, and the inertial confinement fusion program. In 1985 he began several years in Washington, DC, starting as Assistant Director for Defense Initiatives in the White House Office of Science and Technology Policy. He returned to Los Alamos in 1988 and led its Directed Energy StrategicDefense Initiative program. His final role at LANL was to start a nanotechnology initiative, which he directed until his retirement.

His versatility was shown again in retirement, with his continued activity in community and regional development. His interests also took an entrepreneurial direction as a property developer and manufacturer of housing. He was named a Los Alamos Living Treasure in 2006 in recognition of his remarkable civic service.

Sid was unable to remain idle or uninterested in the world he lived in, and his participation in public life reflected that. He served on the boards of the Hertz Foundation, the New Mexico Opera Guild, United Way, was chairman of the Los Alamos County Council, on the Los Alamos County Planning and Zoning Commission, Los Alamos Economic Development Corporation, Los Alamos Arts Council, Los Alamos County Board of Public Utilities, the Regional Development Corporation, New Mexico Museum of National History and Science, and others. Until health problems limited his mobility earlier this year, he was a volunteer science and math tutor for the Santa Fe Alliance for Science.

Sid is survived by his older brother, mathematician Isadore (Iz) Singer and his wife Rosemarie, and five nieces and a nephew, and by sister-in-law Nancy Paraskevas of Los Alamos. He is also survived by his wife, Elizabeth Allred and her wonderful family who adopted Sid as their own when the two married in 2000. This included brother in law Karl Bode of Abiquiu, Charlotte Paetzold (Corky) of Abiquiu, Josephine Merten (Henry) of Pleasant Hill, CA, and Gertrude Valles of Martinez, CA. In addition, Sid was warmly welcomed into the families of Elizabeth’s children, Susan Allred, Katherine Christopher, and John Allred, her grandchildren, and her great-grandchildren.

A celebration of his life, date and place to be determined.

Should you wish to make a donation, his family is grateful to PMS Hospice Center, 1400 Chama Ave, Santa Fe, NM 87505, for Sid’s final care.