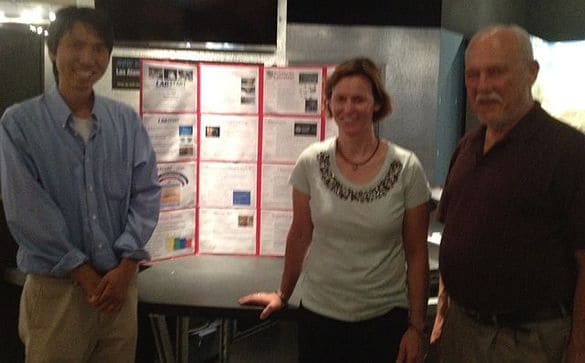 Her mom died when she was 27 years old, and Sandra and her dad continued to live together and take care of each other for the next 19 years. They lost their home and all their possessions in the Cerro Grande Fire in 2000, and Bob died the following summer.

Sandra had a unique and special outlook upon life. No task was considered menial. Every thing and every person mattered to her. She had a strong sense of right and wrong. She had a very happy childhood, and she took on life and her challenges with great poise. She dealt with her personal difficulties with grace and dignity, and her outlook on life was one of excitement and purpose. Her greatest lesson to us all was to never, never, ever give up.

While growing up, Sandra was very involved in life, especially life at Los Alamos High School from 1972 until she graduated in 1977. There she excelled at socializing with all students, and she became very involved with the cheerleaders and pep squad. She was a huge fan of all high school sports, especially football and basketball. She knew every player on those teams during her tenure there, and for many years after she continued to attend games and know the players. In the mid-1970’s, Sandra was presented the “Topper Spirit Award” by then Governor Bruce King, an award she was very proud to have.

Sandra was active and involved with Special Olympics during high school and a few years after. She swam, ran track, and played basketball. She even made it to Minneapolis for the National Special Olympics one year.  The highlight of that trip was a kiss on her cheek from Henry Winkler, “The Fonz.” She talked about meeting Henry and that kiss for years. In her years with Jackie, Sandra got involved in Special Olympics swimming, and swam for a few years. In the fall of 2004, Sandra was presented the “Special Olympics Sportsmanship Award” when she graciously accepted a sliver medal in an event when she really deserved a gold medal.  Sandra was extremely proud of all her Special Olympics medals, and cherished them all.

Sandra worked at Los Alamos National Lab from 1978 until 1993. She was first hired as a Graphics Operator 1 in the AP Division. In 1979 she became an Administrative Clerk 2 in the Personnel Records Office of HR, and her duties included delivering mail and alphabetizing and correctly filing paperwork within Personnel folders. Sandra held a “Q” clearance granted by the US Department of Energy. While Sandra never had access to any classified information, she was allowed unescorted access to the Administration Building when she hand-carried mail and other forms to Senior Managers or the Laboratory Director’s office. When Sandra was delivering mail, it was her bright smile and cheerful attitude that everyone looked forward to. In more recent years, Sandra worked for Las Cumbres Learning Services and Northern New Mexico Quality Care. She shredded papers at both jobs, and found much pride in a job well done. Sandra was well liked by her colleagues and teammates at work.

After her dad died, Jackie Petersen and her family took care of Sandra. Sandra and Jackie met in the spring of 1970 when Jackie was volunteering in Sandra’s class at Mountain School. Sandra and Jackie developed a love for each other that continued to grow stronger throughout their lives. Sandra lived independently in her own apartment in Jackie & Tom’s home for almost eight years. Sandra became unable to care for herself late in 2010, and she moved to the Espanola Valley Nursing Home where she received excellent care for the rest of her life.

Sandra had a smile that could light up the room, and she was a treasured part of so many people’s lives. She will be greatly missed.

Services for Sandra will be on Wednesday, April 23. Burial will be at Guaje Pines, next to her mother and father, at 10 a.m., and everyone is welcome. Funeral service will be at 11 a.m. at First United Methodist Church, 715 Diamond Dr., Los Alamos, with reception to follow.