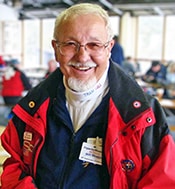 He was born in Philipsburg, PA on June 23, 1936 to Samuel Ralph and Martha Amelia Montes Skaggs.

He was preceded in death by his parents and brother Richard Skaggs. Bob (Bobby, Robert, Dad, Opa) is survived by his loving wife of 62 years, Barbara Jan Hurley Skaggs of Nambe, NM, and his sister Mary Jean Fields of Dallas, TX.

He was a military veteran, U.S. Army Reserve, Captain. Bob enjoyed a very accomplished career with a PhD in Material Science specializing in high temperature ceramics. He retired from Los Alamos National Laboratory after 33 years. Throughout his career, Bob encouraged and mentored many people to realize their potential to become the best they could be.

He was a founding member of the New Mexico State University Mechanical and Aerospace Engineering Academy and served as a volunteer professor and student advisor until the end of his life. He also taught engineering at the University of New Mexico Los Alamos.

Bob loved to share with friends and family, outdoor activities, reading and learning. He enjoyed travel and adventure, good conversation, excellent wine, and delicious food, especially lemon meringue pie and ice cream! Bob was also a generous volunteer of his time and abilities. He was an amateur radio operator, fire department volunteer, and beekeeper among many other pursuits in his spare time. He was a New Mexico search and rescue coordinator, National Ski Patroller, and American Red Cross instructor.

24 years ago, Bob received a lifesaving donation of a kidney due to polycystic kidney disease. He followed a meticulous lifestyle to maintain his health which allowed him to spend these years with family and friends. A large part of his health regimen was a daily mile swim (over 100 miles a year). He was a transplant athlete and represented Team New Mexico and U.S. Transplant teams at various national and international games around the world winning 70 medals over the 24 year period (39 golds, 22 silvers, and 9 bronze medals).

Bob was proud of his family legacy. He shared his last precious days with his true love, Barbara and all of his children. A few days before he passed, his family held an in-person Irish wake. Most of his large family with several close friends and neighbors met at his house to share how they were inspired by him and to celebrate his life in an event at which he was fully present and engaged.

Bob’s family offers special gratitude to the many CareSource caregivers, Presbyterian Home Healthcare and Hospice, and the Christus St. Vincent providers and caregivers that extended him much care and comfort.

Memorial donations in Bob’s name can be made to Donate Life America (and/or become an organ donor at donatelife.net) or to the LANL Foundation (lanlfoundation.org) to support education in northern New Mexico.

Services and reception will be held at Nuestra Senora de Guadalupe de Valle de Pojoaque Church.  Services include Rosary March 5 at 6:00p.m. and Funeral Mass March 6 at 10:00a.m. with a reception in the parish hall directly following the mass. A memorial will also be held at the Pajarito Ski Area near Los Alamos on June 20, 2020.