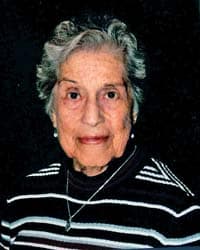 Ruby Magdalena Vigil Johnson passed away peacefully June 6, 2022, on the anniversary of her father’s birth.

Her sister and her daughter were at her side.

Ruby was born in Cundiyo, New Mexico April 25, 1926 to Noberto Vigil and Elena Trujillo Vigil. Ruby spent her childhood at home taking care of the livestock, fruit trees, beans, and chile alongside her parents, her brother, and her three sisters.

Subsistence farming in an isolated village teaches one strength, resilience, resourcefulness, and responsibility, all of which Ruby exhibited to a high degree. (She often also described “stubbornness” as one of her qualities, although we think of it more as persistence and faith.)

For a quiet country girl, Ruby lived a pretty extraordinary life. She and her sisters all attended the Loretto Academy in Santa Fe. After graduation, Ruby traveled to California, where she worked in a cannery and attended secretarial school. She was later hired as a member of the steno pool at Los Alamos National Laboratory and moved to Los Alamos while it was still a closed, secret location.

During those early years in Los Alamos, Ruby met her one and only love, Allen M. Johnson, and the two were married April 5, 1953. Allen and Ruby shared many interests, including expert marksmanship, frequent fishing and camping trips, and caring for home and garden. At work, Ruby received professional advice from Robert Oppenheimer, who liked to escape from his work to go fishing in the Cundiyo area with Ruby’s father Noberto.

Ruby worked hard and adapted well to the many changes in style and technology in the office, going from carbon copies on onionskin in a manual typewriter to proficiency with email, word processing programs, and Facebook (although she refused to give up her flip phone)! Ruby received many awards and recognitions for her work, and was ultimately promoted to an executive secretary position at the Atomic Energy Commission, now the Department of Energy. Ruby worked for the federal government for more than 50 years and continued to threaten to go back to work right up to the last month of her life. She loved staying busy.

Ruby was also an accomplished bowler, and over the 50 or more years of league bowling, she made some of the most lasting friendships of her life.

Ruby is preceded in death by her parents and her husband, by her sisters Adelina Vigil of Santa Fe and Cundiyo, and Guadalupe (Pita) Lujan of Taos, as well as by her brother Jose Vigil of Chimayo, great-nephew Bryan Sanchez, and grandson Dylan Ward.

A rosary for Ruby will be held at 6 p.m. Sunday, June 26 at Berardinelli Family Funeral Service, 1399 Luisa Street, in Santa Fe, (505) 984-8600. Ruby’s funeral mass will be held at the Immaculate Heart of Mary Catholic Church, 3700 Canyon Road in Los Alamos at 1 p.m. Monday, June 27, with a reception following at the parish hall. Ruby will be interned at the Santa Fe National Cemetery at 1:30 p.m.  Tuesday, June 28, where she will be reunited with her husband.

The family wishes to thank the many people at Montecito in Santa Fe, Ambercare Hospice, Berardinelli, IHM, and Santa Maria de la Paz for their thoughtfulness and help during this time.