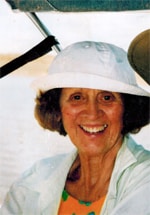 Rosemary Williamson Colgate, “Rosie” passed away peacefully in her White Rock home, surrounded by her family on April 19, 2018.

She was born on August 13, 1924 to Elizabeth Bissell and George Williamson in Albuquerque, New Mexico.

Her early years were spent in New Mexico, Connecticut, Maine and New York. Rosie was one of four children. Her three sisters were Yvonne Foster (deceased), and two half sisters, Karen Howorth of Homer, Alaska and Mary Osborn of San Antonio, Texas.

In Rosie’s early years she was an avid sailor and outdoor girl, participating in many regatta races throughout the northeast. Rosie enjoyed hiking, skiing, swimming and tennis, along with traveling, reading and politics. She taught herself to cross country ski when she was young and to cook incredible dishes as an adult. She was an avid reader of over 10,000 books. She also enjoyed The New Yorker and it’s cartoons, which brought her great pleasure. These passions continued throughout her life. Rosie loved architecture having designed and built four houses in her lifetime.

Rosie attended Vassar University for two years and continued her education at Cornell University, graduating with a Degree in Electrical Engineering in 1947, being one of the first women graduates in this program.

Rosie was married for 66 years to Stirling A. Colgate, who passed away in 2013.

Following her husband’s scientific career, Rosie lived in Ithaca, NY, Berkley and Livermore, CA, Socorro, NM, Aspen and Ward, CO and finally Los Alamos, NM, where she and Stirling lived for 43 years. Together, they traveled the world extensively.

Rosie was actively involved throughout her life with the League of Women Voters, ACLU of NM as co-Chair, and the Democratic Party.

Projects in her life included writing science articles for the Aspen Times newspaper, opening the first on-campus bookstore at New Mexico Tech in Socorro and her involvement and success limiting height restrictions of buildings in Los Alamos.

At the age of 73 Rosie became Trustee of a family business and successfully ran it for 14 years. Other work endeavors included working at Electrolux in New York City and working at Livermore National Laboratory in California.

Rosie had a sharp wit and intelligence plus a warm and generous spirit. She will be greatly missed by her family and friends.