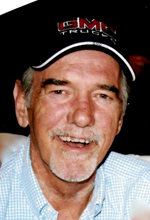 Ronald Dean Holmes, 67, of Georgetown, Texas, formerly of Los Alamos, New Mexico passed away on June 12, 2015 with family by his side. Ron was a pillar of strength, courageously battling kidney cancer for the past ten years.

Ron was born on January 2nd, 1948 in Salina, Kansas to Robert Lewis Holmes and Alta Laverne (Rutherford) Holmes. Ron’s father proudly served his country in the United States Air Force, moving his family to a number of locations. Ron spent the majority of his youth in Roswell, New Mexico, while enjoying summers on his uncle’s farm in North Texas .

Following Roswell, the family moved to Los Alamos, New Mexico where Ron played football and graduated from Los Alamos High School in 1966. Upon graduation, Ron attended Technical school in Denver, Colorado. Returning to Los Alamos, Ron applied his passion and skills to the Los Alamos National Laboratory until his retirement in 2006.

Ron and his wife of 27 years, Jeanne (Ivie-Van Etten) Holmes followed their dreams to spend their retirement years in the Texas Hill Country. In order to be closer to his children and grandchildren, they chose Georgetown, Texas. Ron also enjoyed part time employment at the Georgetown Home Depot.

For several years, Ron was an active member in the Pajarito Masonic Lodge #66 and the Order of the Eastern Star #63 in Los Alamos, NM. He also served on the Lodger’s Tax Board and as the Chairman of the Los Alamos Fair and Rodeo Board. Ron was always enthusiastic to attend the good ol’ American Rodeo. He had an enduring love for automobiles, and in his leisure time enjoyed rebuilding classic vehicles. So much so, he was one of the founding members of Classic American Rides car club, “CAR” for short. When the horses under the hood weren’t enough, Ron enjoyed working with the horses he owned.

Ron will always be remembered for his quick wit, tenacity for life, and unwavering generosity towards those he held dear.

In lieu of flowers, the family would appreciate a donation be made to the American Cancer Society at https://donate.cancer.org/index.

You may share a message or memory in the online memorial guestbook at www.RamseyFuneral.com.