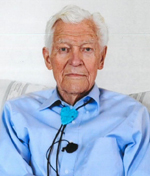 Roger L. Rasmussen, 96, died at home in Los Alamos on May 4, 2017. His daughter Beth, Fr. Glenn Jones, and neighbor and family friend Deidra Remde were at his side. He was the loving husband of Jane Keller Rasmussen, whom he met while she was serving in the Women’s Army Corps in Los Alamos. They married in Santa Fe in 1945; she preceded him in death in 2007 after a loving marriage of 62 years.

Roger was born in Mason City, Iowa in November 1920, and spent most of his youth in the Chicago area. He was a student at Illinois Wesleyan University when Pearl Harbor was attacked, motivating him to enlist in the Army in 1942. Following his enlistment, he was sent for further studies in electrical engineering at Lafayette College in Pennsylvania and thereafter at the University of West Virginia studying what Roger described as “electrical engineering, including an unusual amount of physics”. Some of his classmates were sent to Oak Ridge or Hanford; the Army sent him and four other GIs to an “unknown location” by train. He disembarked in Lamy, NM, where he and the other members of the group were met by a military staff car and taken into Santa Fe on what he recalled as “a bright, beautiful clear day”. The group reported in and were taken up to The Hill where they became part of the Manhattan Project as members of the “Special Engineering Detachment”. He was what was termed a “junior scientist”, working with scientists of international renown.

On July 16, 1945, Roger was present “on a rising slope to the east of Trinity Site” for the first detonation of a nuclear device. Years later, Roger revisited Trinity Site, and revised his estimate of his distance from ground zero from what he had thought was 15 miles to a measured 6 miles.

Roger and Jane loved New Mexico and stayed on in Los Alamos following the end of the war, both of them working at Los Alamos National Laboratory. Roger’s career with the Lab spanned 40 years full-time, plus many years thereafter as a consultant. His initial work in the field of electronics developed more into the area of physics as time passed.

Roger was the last surviving charter member of the Los Alamos Council of the Knights of Columbus, and was a fourth-degree Knight. He was a 35-year member of the American Legion and served as Department Commander in 1990-1991.  He was proud of his military service.

Roger was much loved in the community for his warmth and kindness, loving and generous nature, and sparkling blue eyes. He will be greatly missed.

A rosary with an honor guard from the Knights of Columbus will be recited for Roger at Immaculate Heart of Mary Church in Los Alamos on Monday, May 29 at 7:00 p.m., preceded by a public visitation at 6:00 p.m. Mass of Christian burial will be celebrated at Immaculate Heart of Mary on Tuesday, May 30 at 10:30 a.m., followed by burial with military honors at Santa Fe National Cemetery at 12:45 p.m.

In lieu of flowers, the family requests that donations be made to Los Alamos Visiting Nurse Service—which treated Roger with love, dignity and professionalism for many months—or Immaculate Heart of Mary Roman Catholic Church, Los Alamos, where he was a regular parishioner and found the center of his life. The family of Roger L. Rasmussen has entrusted the care of their loved one to the DeVargas Funeral Home & Crematory of the Espanola Valley. 505.747.7477 www.devargasfuneral.com.