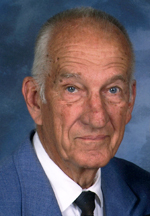 Bob grew up on a Kansas farm. He went to school in a one room school house from first through eighth grade before attending high school in Cedar, Kansas. He enlisted in the U.S. Navy the week after Pearl Harbor, and it was during his service time that he developed a lifelong love of flying planes. Bob put himself through school at Fort Hays Kansas State College using the GI Bill, earning a masters degree in chemistry.

While at college he met Esther Rice and they were married in 1949. His first job after college was as a high school science teacher and bus driver in Otis, Kansas. He then worked at Dow Chemical Company in Midland, Michigan for 4 years. In 1957, the family moved to Idaho Falls, Idaho, where he worked at the National Reactor Testing Station. In 1970, Bob took a job at Los Alamos Scientific Laboratory where he worked until his retirement.

Bob was a 70-year Mason and held many local and state offices during that time.

He was preceded in death by his parents, son John, infant daughter Delores Jean, and sisters Joy Carlson and Dorothy Everett.

A memorial service will be held Friday, June 9, at 2:00 p.m. at Bethlehem Evangelical Lutheran Church of Los Alamos.

Memorial donations may be made to the Alzheimer’s Association of New Mexico or to the Memorial Fund of Bethlehem Evangelical Lutheran Church.

The family of  Robert Abernathey wishes to thank A Nurse in The Family and Ambercare Hospice for their compassionate care.