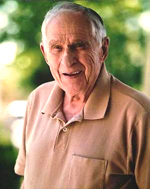 Robert, who was known to friends and family as “Bob” or “Bobby”, was born in Fort Wayne, Indiana on March 31, 1923. At an early age, the family moved to Columbus, Ohio, which he would always consider to be his home town. He was very independent as a youth and made extra money as a paper boy, delivering the Columbus Dispatch. He was so good at delivering the paper in fact, that he twice won sales contests with the Dispatch and was able to go on two, all-expense-paid trips to see his favorite swing  band, Glenn Miller. He was a devoted fan of all forms of swing music and became a self-taught drummer, which was a talent he used through his whole life.

Bob graduated from Columbus North High School in the spring of 1941, and being essentially unaware of events in the Pacific, enlisted in the United States Marine Corps in mid-November, which was 15 days before the attack on Pearl Harbor. He was in boot camp in Paris Island, North Carolina when war broke out on December 7 and he ended up becoming a member of the 1st Marine Paratroop Division. Bob was eventually shipped overseas to Camp Kiser in Tontouta, New Caledonia to continue paratroop training when the Marine Corps decided that parachutes and Pacific jungles were a bad mix and he continued his training using Higgins boats for amphibious landings. Bob completed his amphibious training and served in combat on many island campaigns, including Vella Lavella, Bougainville and Iwo Jima. Bob received numerous citations and medals and was awarded the Purple Heart. Bob was honorably discharged at the end of the war.

After the war, Bob moved back to Ohio and after searching for a couple of years for his path in life, used his GI Bill benefit and enrolled at The Ohio State University (OSU) in Columbus. Along with his love of music, Bob had a real artistic talent and was drawn at that time to the modern styles of artists such as Jackson Pollock. Bob eventually majored in art and received his bachelor of arts from OSU in 1951. Over the next several years, Bob worked on his own artistic style, continued with his music, and eventually worked his way across the country to Santa Fe, New Mexico, which was a haven for artists and musicians at the time and the place from which he would largely draw his artistic energy for the rest of his life.

For much of his life in New Mexico, Bob drew on his artistic talent to become a self-taught architect and land mapper. He eventually worked for much of his professional career as the tax mapping supervisor for the State of New Mexico. In this role, he was responsible for ensuring all of county assessor offices in New Mexico maintained accurate property maps for their respective counties. He often noted how difficult this job could be at times, as the maps for large counties in New Mexico were occasionally based on 300-year-old land grants whose boundaries were shaped by meandering dry-stream beds known as “arroyos” or even large boulders. He was often engaged to help resolve disputes related to these ethereal land borders.

While he needed a “day job” to pay the bills, Bob’s passion was always his artwork and he continued to refine his artistic style. In the early 1960’s, Bob was able to link a “day job” with his love of art when he taught art at the University of Idaho. In keeping with his college training, Bob largely settled in on an abstract style, working with both sculpture and canvas. Bob was particularly known for his wood relief pieces, where he would use a router and various bits to create a textured relief on redwood panels. He generally created pieces that involved mythical or spiritual subjects, such as Icarus or St. Paul, and after finishing the router work, he would paint the relief with water-based acrylics, which was his preferred painting material because of their vibrant colors. He also created many wood relief pieces and paintings on the variation of a theme he called, “Little People”. His “Little People” pieces presented simple abstract characters in small vignettes of life that often depicted, as he called it, “man’s inhumanity to man.”

Over the years, Bob completed many, diverse art projects. In the late 1950’s, Bob worked as a Park Ranger at Bandelier National Monument near Los Alamos, New Mexico. While a ranger, he created a detailed model of the Tyuonyi Ancestral Indian Pueblo that is the centerpiece of the Monument and the model was on display in the park’s museum lobby for many decades. In the early 1960’s, Bob was commissioned to create the central artwork for a large church in El Centro, California. The works he created for this project included a nearly two-story-tall metal abstract cross, wood and metal sculptured baptismal fonts, and wood reliefs of the “stations of the cross”. Bob also completed a major project in the 1990’s where he painted all of the 19 Indian Pueblos in New Mexico using a water-wash technique.

Bob was also a talented drummer. One of his first major “gigs” was to entertain the troops during the war in New Caledonia by playing the drums in his first big band, “The Tontouta Jive Bombers.” In his many travels back and forth across the country over the years from San Francisco to Miami, he was a versatile percussionist and played drums and percussion in many groups and settings, ranging from three piece jazz combos and swing big bands to classical orchestras. Bob had multiple long running gigs at notable spots in and around Santa Fe, including The Estrada Room, The Palace, and El Nido. He regularly sat in with groups all around Santa Fe, such as the Los Alamos Big Band, and played with all of the notable jazz musicians in the area. He also loved to listen to great music and really enjoyed all forms of jazz, classical music, and great vocalists. Along with his love of Glenn Miller’s band, he particularly enjoyed Miles Davis, Chet Baker, Bill Evans, Frank Sinatra, Buddy Rich, and Igor Stravinsky. In the heyday of Hi-Fi and Stereo vinyl records, Bob had a collection that was the envy of his friends and family and they would often visit just to sit and listen and chat about life with him.

No story of Bob Clay would be complete without noting his love for The Ohio State University, Buckeye football, and the Best Damn Band in the Land. He would talk about listening to the crowd and the marching band at games on Saturday afternoons as a child while playing outside Ohio Stadium. He talked about the freezing cold and snow conditions when he attended the famous “Snow Bowl” game against Michigan in 1950 (a game that involved a total of 45 punts). He cried almost every time he heard the band play “Chimes” and “Carmen Ohio”. Although he hung anxiously on the score of every game, every year, he of course got particularly revved up for Michigan week. On Saturday morning before the game, he played the first side of the album, “Across the Field” on his record player at full volume for the entire neighborhood. At game time, he would sit on the couch in front of the TV, wrapped in a scarlet and gray, crocheted afghan blanket that was made by his sister Joan. At half-time, he would eat “gringo chili”. He was never as animated in his life as he was during “The Game”, swinging on a pendulum of emotion between agony and hysterical joy. It was fitting that his beloved Buckeyes defeated “the team up north” in dramatic fashion on the last game he would watch the Saturday before he passed away.

Bob is survived by his son Bill Meier and his wife Karen of Columbus and their children Pamela, Jennifer (and her children Rose and Robert), and Ben, his son Marc Clay and his wife Bonnie of San Jose and their children Samantha, Danger, Sarah, Leigha, Elliott, Lynzee, and Bonnie-Wren, and his daughter, Gretchen (Clay) McQueeny and her husband Tim of Minneapolis and their children Sean and Kyle, and many nieces and nephews. Bob was preceded in death by his parents, Lloyd and Dorothy Clay, and his siblings, Joan, Betty Lou, and Charles.