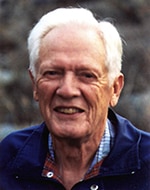 He was born November 24, 1919 in Lincoln, Nebraska, the eldest of three sons of Ralph Ellis Cowan and Florence Athey Eller Cowan.  The family moved to Wichita, Kansas in 1929, where Bob obtained a bachelor’s degree from Friends University (FU) in 1942. He received a Ph.D. degree in physics from The Johns Hopkins University in 1946, with his thesis in the field of atomic spectra, working under Prof. G. H. Dieke.

In 1944 in Wichita, he married Dorothy Mabel Martinson, whom he had met at FU. They lived in Baltimore for two years and then moved to Chicago where Bob did postdoctoral research at the University of Chicago, then back to Wichita where Bob taught at FU for three years. In 1951, the family moved to Los Alamos, NM, where Bob spent the rest of his career at the Los Alamos Scientific (later National) Laboratory (LANL), working in the Theoretical Physics Division. He worked primarily in the field of atomic structure and spectra, developing computer programs for the calculation of these quantities that became widely used throughout the developed world.

Officially retired in 1985, Bob continued for ten more years working part-time at LANL and with various collaborators in the US, England, the Netherlands, and Sweden.

Bob was a Fellow of the American Physical Society, the Optical Society of America (OSA), and LANL. He published over 120 scientific papers, and was author of the 1981 book “The Theory of Atomic Structure and Spectra,” still in print after more than 35 years. In 1982, he was awarded an honorary Doctorate degree from Lund University, Sweden, in 1984 received the William F. Meggars Medal of the OSA, and in 2008 the Los Alamos Medal from LANL.

Bob served for many years as an umpire in girls’ Lassie League softball games, as leader of a Boy Scout Explorer Post, and in tutoring foreign students and spouses in English as a Second Language. Bob was a member of The United Church of Los Alamos, where he served as Treasurer/Bookkeeper for 10 years and then as assistant to his successor for several more years.

In 1967, Bob joined the Los Alamos Mountaineers. With them, friends, scouts, or solo he climbed 95 of the highest 100 peaks in Colorado, including all 54 mountains over 14,000 feet in elevation, and many of the high mountains in Northern NM. In 1982, he climbed the three highest peaks in Mexico (elevations up to 18,700 feet), and in 1993, on a three-week trek in Nepal, he hiked up a 17,600-foot peak with wonderful views of Mt. Everest fifteen miles away.

Bob’s wife, Dorothy, died in 1987 from a massive stroke two years earlier. In 1990, he married Wilma Thornburg Law, with whom he shared many happy experiences and travels in North and South America, Europe, the USSR, and New Zealand. He was predeceased by his parents and his brothers Richard Eller and Charles Russell Cowan. He is survived by Wilma, by the children of his first marriage Nancy Lemons and husband Ross of Los Alamos, Charles Eller Cowan and wife Pattie of Carrollton, TX, Jerry Cowan and Jennifer Leon of Los Alamos, and Marji Larson of Urbana, IL; also by seven grandchildren, three great-granddaughters, and by Wilma’s four daughters Doli LaRotonda, Susan Johnson, Nancy Dye, and Cathi Law and families.