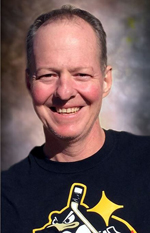 Robert (Bobby) Steedle, 50, of Las Vegas, Nevada, passed away on July 23, 2016 after a courageous battle with pancreatic cancer.

He was preceded in death by his paternal grandparents, Russel and Jean Steedle; and his maternal grandmother, Martha Jean Billings. He is survived by his loving fiancé Marilou Wallace, who took such good care of him during his illness and the 12 years they spent together previous to his diagnosis.

Bobby graduated from Los Alamos High School in 1984 and New Mexico State University in 1989. He called Las Vegas, Nevada, home for the past 26 years and enjoyed all the city had to offer. Bobby enjoyed fishing and golfing. He could often be found with either a pole or a club in his hand. He also enjoyed traveling. Together with Marilou, they had many extraordinary adventures, which took them all around the world. He especially enjoyed going to the Philippines, which is Marilou’s home country. Bobby enjoyed watching sports and lived long enough to see his beloved Pittsburgh Penguins win the Stanley Cup.

If you knew Bobby, he considered you a friend. He was always there to lend a hand, celebrate a victory, or just enjoy a good Barbeque. Bobby enjoyed a good joke or a funny story. He loved nothing better than making others happy–which he did daily.

There was nothing that Bobby enjoyed more than good food and good wine with family and friends. In lieu of flowers, the family requests that you enjoy a good meal and some drinks with your loved ones in his honor. Raise a glass and toast his memory.

Bobby will be forever in our hearts and we eagerly await the time when we will all be reunited in Heaven. Until then, we will cherish his memory and all the good times he gave us,