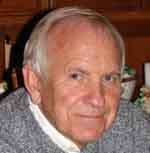 He was born in Chicago, IL, on December 17, 1935, and graduated from Washington and Lee High School in Arlington, VA, in 1953.  He went on to Kings Point Merchant Marine Academy on Long Island where he received his Bachelor of Science Degree in Marine Engineering in 1958. After receiving that degree and spending a year at sea, he enrolled at the University of Maryland, in College Park. In 1965, he earned his Ph.D. in Nuclear Engineering.

Dick was a member of several environmental organizations and coached soccer during the 20 years the family spent in Idaho Falls. In Los Alamos, he was on the board of the Concert Association for several years.

Dick loved spending time with his family and friends both old and new, with friends going back to W&L HS. His interests included working, skiing, backpacking, playing soccer, traveling in his camper van, reading, following politics, listening to music of many kinds, particularly classical and Irish, playing serious Scrabble, not so seriously playing his harmonica, and fetching with his dog, Sunny.

Dick is survived by his wife, Bonnie; daughter, Betsy; son, Chuck, and his wife, Julie, and their two children, Micah Chase, 9, and Aleah Nicole, soon to be 7 – he was their Nampa.

There will be a gathering of family and friends both in Idaho Falls and Los Alamos during the summer. Dick was cremated, and the family will be spreading his ashes in some of his favorite places.

In Dick’s memory, please enjoy a good book, ski a Black Diamond Run (hopefully with fresh powder), take a long hike with a heavy backpack, kick a soccer ball, pull out your Scrabble Board, catch a fish, watch a sunrise or sunset, scratch a dog behind his ears or do something you love to do. He was a gentle, serious and yet fun-loving person who is very greatly missed by his family and friends.