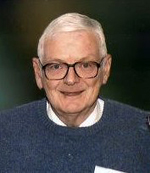 Richard A. “Dick” Keller, a Fellow at Los Alamos National Laboratory, died on September 1, 2015 in Los Alamos, NM. He was 80 years old. His death was related to his long struggle with Parkinson’s disease.

Born in Pittsburgh, PA, Dick lived with his family in Los Alamos since 1976 where he distinguished himself in the field of analytical chemistry, earning an international reputation. Among his contributions to science, the most notable was his pioneering of single molecule detection, a technique he and his collaborators applied to DNA sequencing as part of the Human Genome Project. In 2008, he was invited to speak at a Nobel Symposium on single molecule detection in Stockholm, Sweden. This technique continues to have applications in medical diagnostics and biology among other fields and has spurred further innovations.

Dick received the American Chemical Society Division of Analytical Chemistry Award for Spectrochemical Analysis in 1993, among other prestigious awards. Much of his important work was the result of interdisciplinary collaboration, at his initiative, between physical and biological scientists. While highly accomplished in his field, Dick had “a wonderful aversion to the pomp that often accompanies successful people,” in the words of one close colleague.

Dick was a gifted mentor to post-doctoral (“post-doc”) fellows, a key aspect of his scientific legacy. During his time at Los Alamos, Dick recruited, supervised, and guided dozens of post-docs who in turn have made significant contributions to diverse fields.

Dick was a dedicated husband and the father of three children. Known for his humor and unfailing optimism, his passions were family and science. His personal and professional integrity and his strong work ethic will continue to inspire family, colleagues, and friends. He enjoyed playing tennis, hiking and backpacking, and watching professional football and college basketball. One of his great pleasures was hosting an annual Super Bowl party for dozens of colleagues and friends.

Services will be held Monday, September 7, 2015 at 11:00 AM at the First United Methodist Church, 715 Diamond Drive, Los Alamos. In lieu of flowers, contributions may be made to the Michael J. Fox Foundation for Parkinson’s Research or another preferred charity. The family of Richard A. “Dick” Keller has entrusted their loved one to DeVargas Funeral Home & Crematory of the Española Valley. 505.662.2400 – www.devargasfuneral.com.