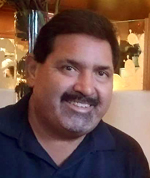 Raymond “Ray” D. Pacheco passed away at UNMH on February 10, 2017 surrounded by family and loved ones by his side. Ray was born in Los Alamos, NM. He graduated from Los Alamos High School as a “Hilltopper”. He continued his education at NMSU with a BA in Finance. At the time of his passing he resided in Santa Fe, NM.

He had many interests: music, motorcyles, reading and enjoying his furry companions, Tank and Sassy (previous Akitas – Kimo, Sumo, and Daisey).

Growing up in Los Alamos, his younger years were so much fun. He enjoyed riding his bike throughout the town and playing in the canyon on Rim Road. He enjoyed hanging out with Eric Payne and his buddies in high school and college. He enjoyed being the little brother because he was catered to by his oldersiblings.

Ray enjoyed most of all riding and talking about motorcycles. If you had a minute to talk with him about motorcycles, that minute would turn into hours and then a ride anywhere in New Mexico, Colorado, Wyoming and Idaho!  His weekends were for riding, especially with Mary, Johnny, Marie, Bobby, Gary, Larry/Debbie, Will and many many more friends. When he became ill he longed for those days again to escape his pain he had to endure.

His places of employment were with PCS Telecommunications based out of Los Angeles which was a contractor to the NM Correctional facilities; Santa Fe Municipal Court; State of New Mexico; TDI-subcontractor to LANS; and last place of employment was Los Alamos Medical Center. Ray became friends with many of the employees at his places of employment. He cherished his friendships with each one that he encounted. Ray always remained close to several of his co-workers when he left each employment – Fernando Villa, Liz Urioste, Scott Barr, Jan Bentley, Kevin Vigil, Rob Mulikin, Sandy Palmento, Pete Dominguez, Gary Milburn, Mark Karaffa, Brent Butler, Beverly Simpson, Sadie Valdez and many more.

Ray met Mary while working together at Santa Fe Municipal Court. Their friendship grew into marriage for 17 years. Their furry friends were very important to them along with Mary’s children, Anthony, Wendi, Bobby and grandchildren, Santiago and Samantha. Ray was their friend and always gave them the advice as a father – always wanting them to do more than less and will leave an everlasting impact on their lives. Ray was Mary’s soul mate together they enjoyed happy and sad times — but were true to each other.

Ray was very special to his mom, Ida. No one could make the best red Chile like his mother. He enjoyed the times he had with his family living in Los Alamos. He remembered spending time building an airplane with his dad and talking with him. Riding through the Jemez mountains — meeting up with the stunt people who were filming “Wild Hogs”. Driving to Colorado to visit Ralph and Judy to “pick up the little girl”… right Johnny? The hours of reminiscing with Johnny brought so much laughter for hours between the two. Those will be missed.

Ray was a special guy and will be missed by all. These were just a few memories that were important to him.

Ray, there’s no more pain that you need to hide. Thank you for touching our lives and showing us that even though we have pain and problems in our lives, we can still go through each day and smile.

If you would like to make any donation, please send it to your favorite animal shelter near you, in his honor.