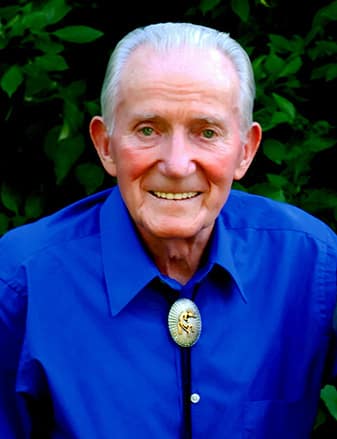 Paul was born November 6, 1923, in Garvin, OK to Wheeler and Bertha Harper as the seventh of ten children. He passed away peacefully on October 1, 2018 at the age of 94 in Albuquerque, NM.

Paul grew up during the Great Depression, spending most of his time working on the family farm and helping to take care of his three younger siblings. Despite those responsibilities, he managed to excel in all of his school-related activities. In high school, he graduated at the top of his class and was a multiyear all-state basketball player.

Paul was drafted soon after graduating from high school and served in the US Army in World War II from 1943 to 1945. Assigned to the 13th Armored Division, his unit was deployed overseas and joined General George Patton’s Third Army in France. Among other battles, Paul fought in the Battle of the Bulge where he earned the Bronze Star. He was one of the fortunate to return home to the USA, where he then entered the United States Military Academy at West Point shortly before the end of the war.

Paul eventually decided not to pursue a military career and left West Point after being honorably discharged from the Army. He then used the G.I. Bill and enrolled at Oregon State University in Corvallis in 1946. He met Patty Lugenbeel there, and they were married on December 17, 1948.

Paul worked at the Lab for thirty-two years starting in T (Theoretical) Division and then ending his career working in C (Computing) Division. During that time, they had three more sons: Bryce, Dana, and Bret.

In 1961 and 1963, Paul took leaves of absence from the Lab and earned a PhD in Mathematics from Oklahoma State University in Stillwater. While at the Los Alamos Lab, he was recognized in Who’s Who of American Scientists and eventually rose to lead C Division for a time. He was an active member of the VFW and Elks club, and also taught mathematics night classes at the University of New Mexico branch in Los Alamos.

After retirement, Paul and Patty moved to the cabin that he and the family had built in the early 1960s near Chama, NM. They lived there year round for 22 years and traveled extensively across North America in their Jimmy and trailer. In 2005, they purchased a townhome in Albuquerque where they could live during the colder months before returning each year to live at the cabin during the warmer part of the year.

A self-taught guitarist, Paul will be fondly remembered for leading family and friends in many loud and fun-filled singalongs. He loved to hunt, fish, camp, garden, and travel. He could build anything and fix most everything.It would be hard to find a more caring, loving, and honest man.  Paul will be greatly missed by family and friends.

Paul was preceded in death by his nine siblings and one great-grandson, Charlie Summers. He is survived by his beautiful wife of almost 70 years, Patty of Albuquerque; sons Ron and his wife Sue of Sandia Park; Bryce of Albuquerque; Dana and his wife Vivian of Boise, Idaho; and Bret and his wife Maggie of Louisville, Colorado. Paul leaves seven grandchildren: Ron Harper Jr and wife Elisa; Sasha Summers and husband Dan; Tammy Smith and husband Greg; Bryce Paul Harper; Breanne Bateman and husband Matt; Rebecca Harper; and Emmalee Harper. He also leaves eleven great-grandchildren and many nieces and nephews.

A military funeral service will be held at the Santa Fe National Cemetery on October 19 at 11:15. Later that day, there will be a “celebration of life” party at the County Line Restaurant in Albuquerque starting at 2:00.

In lieu of flowers, please make a donation to your favorite charity.