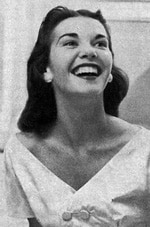 Mrs. Patricia Mary Pappas (nee Doyle) of Los Alamos, passed away peacefully on Friday, January 12, 2018 at the age of 86 after battling dementia for several years. Patricia is survived by her daughter, Mary Beth Pappas; her son, Glen Pappas; her brother, John Doyle; and grandson, Brandon Pappas. She was preceded in death by her husband, George Pappas; her parents, Patrick and Mary Doyle; her sisters, Pegge and Kathy Doyle; and her grandson, Ryan Pappas.

Patricia was born to parents Patrick and Mary Doyle on May 17, 1931 in New York, NY. She grew up as the second youngest of four and attended Bishop McDonnell Memorial High School. After graduating from high school, through the early years of her marriage, Patricia worked as a model, most notably for the William Schuller Agency.  She was featured in the renowned Glamour magazine, and she appeared in advertisements in various New-York-City-area newspapers.

In 1954, Patricia married World War II veteran, George Pappas. The couple had two children and, shortly thereafter, moved from New York City to Stony Brook, NY. Patricia remained in Stony Brook until her retirement from Disc Graphics, a record-label-printing company, for whom she worked as an executive assistant, in 2000. From 2000 through the beginning of 2012, Patricia lived in Boynton Beach, FL. She spent the remainder of 2012 in Colorado at Brookdale Place of Colorado Springs. In 2013, Patricia moved to New Mexico, where she resided at Aspen Ridge Lodge in Los Alamos.

Patricia took great pride in her children, who were most important in her life. She also treasured all of her other family members, and her Catholic faith. She delighted those who knew her well, and those who were merely acquaintances, because of her inner beauty. Patricia will be remembered for being a wonderful mother, and a caring, pleasant, funny, and genuinely nice person.

Cremation ashes will be interred at a family gravesite in New York. In lieu of flowers, donations may be made to the Alzheimer’s Association (at alz.org). The family of Mrs. Patricia Mary Pappas (nee Doyle) has entrusted their loved one to DeVargas Funeral Home & Crematory of the Española Valley. 505.747.7477, www.devargasfuneral.com.