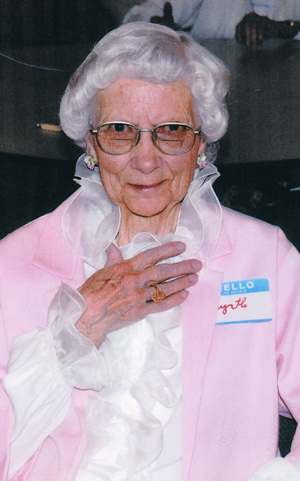 Myrtle grew up in Cedaredge, Colo. where she completed high school. She attended Mesa Junior College in Grand Junction and Colorado State University in Ft. Collins where she studied horticulture and education.

She married Lloyd Williams in 1941. During the war, they lived in Boston where Lloyd did research for chemical warfare and Myrtle worked at General Radio. They later moved to Chicago where Lloyd worked at the Quaker Oats Company and their first two children Clinton and Cynthia were born.

In 1949, they moved to Los Alamos, where Beverly was born. They resided there for 61 years where Myrtle was a homemaker. In 2010, Myrtle moved to Ft. Collins, Colo. living with a sister for a year and then living at the Winslow Independent Living Facility.

Myrtle was a lover of nature and gardening. She enjoyed traveling, visiting all 50 states and many countries abroad, during retirement with her husband Lloyd. She was a very artistic person who had a passion for sewing, quilting, embroidering, and crafts. She was a loving wife, mother, and grandmother and a dear friend to many.

A memorial service will be held at 11 a.m., June 27 at Shepherd of the Hills Lutheran Church, 1200 S.Taft Hill Road, Ft. Collins, Colo. Memorial contributions in her honor may be made to the Macular Degeneration foundation or Pathways Hospice of Northern Colorado. Visit  www.allnutt.com to view Myrtle’s online obituary.