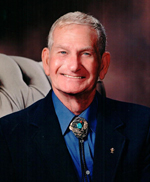 Murl Eugene (Gene) Jenkins went home to meet the Lord, his loving wife and extended family on September 17, 2016, surrounded by his family, and animals after a long and courageous battle with Parkinson’s.

Gene was born on July 28, 1931 to Clifton and Cecil Jenkins in Wewoka, Oklahoma. He attended Oklahoma State University, and Texas Tech University after the family moved to Lubbock, Texas. He met and fell in love with Julia Pruette who was in nursing school there.

He is preceded in death by his parents, Clifton and Cecil Jenkins, his brother James Jenkins, his loving wife Julia, son-in-law Randy Carter, and the light of his eye, his first granddaughter Candace Hacker, great grandson Nathan Hacker and special niece Ronee Ferguson.

Gene originally was transferred from Lubbock, TX with his young family to be the produce manager at the original Furr’s Supermarket in Santa Fe. He loved people and never met a stranger. Warm hearted and kind, generous to a fault, he would give you the last dollar he had without batting an eyelash. He was always there if he felt his family needed him, never questioned why, just went. He was an avid fisherman, boater and sailor and loved the outdoors. His love of animals was as strong as his love of family as he considered his own animals as family. Even when first going hunting here in N.M. he was unable to kill anything. Saying that deer and elk were such majestic creatures and it was terrible to kill if you were not hungry. There was no sport in just killing.

He loved to travel and did a significant amount of it, especially anywhere with a beach and palm trees. He stated several times that watching and listening to the ocean was like listening to a giant breath all the while with an enormous smile on his face. That smile was ever present, sparkling ice blue eyes always smiling, happy and content in his life. He was a very good man, and very special to all who knew him. Gene was a former, Elk and Eagle member.

Though we will miss him and our hearts will ache for his smile and presence, we all know that he is whole again and with those he loves that have gone before him. He is still close in spirit to us all.

He has “Put out his hand, and taken the hand of GOD”.

We would like to thank all the people that helped make his life special and comfortable. Senior Services of Santa Fe, Day Out program in Los Alamos, LAMC all the staff and superior care. UNM medical center for their stellar care of him and his family and to Superior Ambulance service who brought him home to spend his last days.