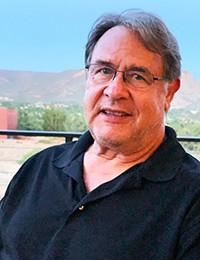 Michael Albert Taylor, beloved husband, father, brother, son, uncle, and friend, passed away on Friday, December 2, 2022, at the age of 69.

He was preceded in death by his parents, and is survived by his wife, four children and his sisters, Marcella Hiebert (Steven) of Broomfield, Colorado; Mary Arrowsmith (John) of Los Alamos, New Mexico; and Theresa Taylor of Lakewood, Colorado.

Mike was born in Los Alamos, New Mexico on March 5, 1953, to Joseph William Taylor and Rosalie (Coffield) Taylor. Mike graduated from New Mexico State University in 1975 and spent his professional life with the Bureau of Land Management, where he met the love of his life and wife of twenty-seven years, Joanie Losacco. Mike’s adoring love for Joanie was apparent to all who knew them. Together, Mike and Joanie raised four children, Kaitlyn Redfield-Ortiz (Zach, Oliver, Grace, and Abigail); Deborah Kane (Chris and Marcy); Jordan Redfield (Alyssa, Easton, and Owen), and James Taylor. Mike was never happier than when his kids were all together. He logged thousands of hours on long drives to pick up his kids, and delighted them with elaborate storytelling, real and imagined. Raising his family was the most important job he had, and Mike put in the work to do it.

Together, Joanie and Mike were the center of gravity for their immediate and extended family, hosting abundant Thanksgivings, Christmases, birthday parties, family dinners, and celebrations that drew family and friends from near and far. With a glass of red wine (no stem) and a paper towel to mop up sweat, Mike regularly labored in the Phoenix heat, grilling small mountains of meat and whipping up batches of guacamole to feed his enormous family. Joanie and Mike’s home was equipped with a revolving door which repeatedly welcomed in returned adult children and their friends, a testament to their generosity and warmth.

Mike’s grandchildren were drawn to him with a magnetism that bordered on magic. Fussy babies instantly relaxed, laying their heads on his shoulders and going limp in his arms. Crabby toddlers and even little boys too cool for cuddling never hesitated to climb into his lap and snuggle. Whenever the grandchildren eagerly ran up his doorsteps and excitedly rang the doorbell seven times, he would call out in his thunderous voice “get in this house and give me a squeezy hug!” and hold his arms open wide. They would then disappear into his office, where he would sit them in his lap and sort through his drawers, depositing coins, melted blobs of metal, stones, pocketknives, flashlights, and trinkets into the kids’ pockets. His read-aloud renditions of Calvin & Hobbes, complete with irreverent impressions of Mrs. Wormwood and Calvin’s dad, filled his grandchildren with laugh-until-you-can’t-breathe happiness.

Mike was always proud to come to the rescue. As the resident biologist, his family tasked him with such unsavory jobs as dealing with the fallout from the dog’s consumption of several bags of candy corn, searching for escaped pet snakes in the house, and handling the pet rodent’s cannibalistic tendencies. Even as his children grew up, and their problems evolved, he reminded them frequently that he was always only twenty minutes away. Countless times and in countless ways, he showed up in only twenty minutes, to rescue them from tragedies big and small.

Among his loves were cold mornings, shooting scorpions with rubber bands, wearing shorts in the winter, watching monsoon storms on the patio, and spicy foods. Mike was a connoisseur of Craigslist and loved a good garage sale. Good luck finding a rock, plant, or bug that Mike could not identify.

Mike loved our public lands. Fishing and hunting with his family was a mainstay in his life. He excelled at gardening. Even when space was sparse, he lovingly grew tomatoes, peppers, and flowers. When he finally had more room, he painstakingly built his own garden, instilling a wonder for life in his grandchildren. His garden was the site of many pea parties and sweet moon-dances with his granddaughter, and overflows with abundance still.

Mike despised ordering from drive-thrus, floor mats in cars, ratchet straps, plumbing, technology of all kinds (“piece of shit”), bullies, sunglasses, January dieting, and people who insult referees and umpires. Much to his loving wife’s frustration, he hated both performing house maintenance and calling a repairman. Mike’s laughs (his sneezes, and his snores) could be heard from across the block. He gave the best, tightest hugs. To be in his embrace was to be safe.

For his wife, his family, and so many others, Mike was home. In his honor, please simply show love to your family. In lieu of flowers, donations can be made to the Leukemia and Lymphoma Society at https://givenow.lls.org/MichaelTaylor