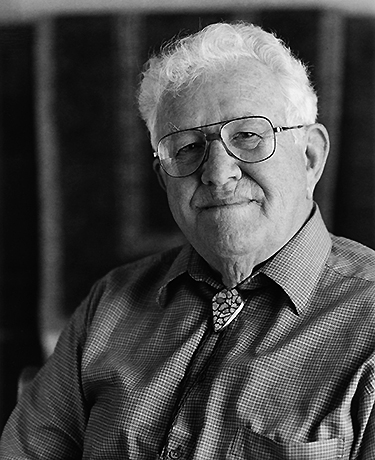 Martin was the moral, intellectual, economic and political compass of a close, loving and devoted family. His wit, wisdom and thoughtful counsel will be missed by family, friends and acquaintances alike. At his side since graduate school, has been his devoted and accomplished wife, Judith Cassidy Gursky.

Martin was born in New York City, New York on March 19, 1927 to Russian immigrant parents Mayer Gursky and Sonia Balen Gursky, who preceded him in death.

He is also preceded in death by his only sibling and partner in wit, intellect and humor, as well as a little early rabblerousing on the streets of Miami, noted astrophysicist Herbert Gursky.

When coaxed from him, Martin told stories, as a child, of riding the subway from the Bronx with his father with rolls of wall paper and all his father’s equipment to hang wallpaper in posh residences in upper Manhattan. Early illness of his father caused the family to relocate to Miami Beach, Fla., in the late 1930’s. His strong determined mother supported the family by running a small grocery store in Miami, while instilling the value of education in her young sons.

Following graduation from high school at age 16, Martin entered Georgia Tech, planning to become an aeronautical engineer. Short of his graduation, Martin was drafted in the waning days of the WWII. Martin spent his stint in the Army as a Sergeant in the Engineer Corp, working on such vital projects as testing can openers by opening the other end of hundreds of already empty cans and crawling through concrete tunnels to test the strength of uniforms.

After the Army, vowing to leave practical engineering behind, he returned to Georgia Tech, finishing his BS and MS in theoretical physics. He entered Vanderbilt for graduate studies in theoretical physics. He was joined at the Physics Department by his brother Herb and met his soon to-be-wife, Judith, there as well. After finishing class work at Vanderbilt, Martin and Judy were married on August 23, 1952, choosing Atlanta, Georgia to marry so Martin’s ailing father could make the trip to the wedding.

After the birth of a son, Michael, and a fairly forgettable job in Falls Church, Virginia, on March 1, 1954, the day of the infamous Castle Bravo thermonuclear weapons test on Bikini Atoll, Martin started work in T-Division. He came at the behest of his former professor and mentor David Hill.

Martin finished work on his dissertation in those early days and as awarded his PhD in physics from Vanderbilt. One of interesting memories of Martin and Judy was about arrival in the still closed town of Los Alamos and staying shortly at Fuller Lodge, when it was a hotel and restaurant and the only place to stay in town. The family lived in several government housing assignments over the next several years before finally settled in 1961 in a home on Barranca Mesa, where they still reside.

Martin’s career at the LASL, later LANL, was spent in T-Division and X-Division. There was even a six month period as a reporter for the Monitor during the budget cuts of the 1970’s. Martin also spent years as an instructor at UNM-LA as the math department coordinator, teaching a generation of students physics and calculus before retiring.

One of Martin’s real passions was politics. He was one of the driving forces in the process of self-government for Los Alamos and the transfer of services, housing and land from the Government to the County and its citizens. His first political fight was in support of County Government receiving the utility and public services for the town, allowing local citizen control rather giving such services away to private corporate interests, a battle the current County Dept. of Public Utilities shows was largely successful.

The only big public function to get away was the hospital. He was on the Charter Commission that drafted the Charter and served several terms as a Democratic member of the then County Commission. Chief among the accomplishments of the Commission at the time in the mid 1960’s, were presiding over the transfer of government services from the Federal Government to the County and privatization of housing in the county and the building of the much revered and maligned County Building overlooking Ashley Pond.

He continued his activism throughout his life, among other things, running unsuccessfully for state legislature, championing and helping to direct the senior center to its success as a community organization, serving many boards for numerous County and civic organizations. He was president of the Jewish Community during the acquisition of the site for and construction of the Jewish Center. In 2003, Martin was named a Living Treasure for Los Alamos.

Through the rest of his life, Martin continued as a public advocate for the thoughtful and restrained use of County funds and power. Through all of that, one of the images that endure from long ago is that of Martin and his Democratic political buddies in the family room playing poker, talking politics and filling the room with laughter, cigar smoke and the joy of a simpler time.

While physics and politics may have been successes and passions, the real joy in Martin’s life was in his lifelong dedication to his wife and his wonderful job of raising a large a devoted family. Though pretty much bereft of musical talent himself, he was a dedicated audience to a family of musicians and performers; he was the primary family tennis instructor and playing partner; he was little league and lassie league  umpire when called on; he made several forays into community theater productions; he was the purveyor of age old disciplinary wisdom such as “stop crying or I’ll really give you something to cry about”; but most of all he was the embodiment of parental guidance, support and wisdom. The wonderful family we all enjoy is due, in no small measure, to Martin and Judy’s indelible example.

Martin will be interred at Guaje Pines Cemetery in a private ceremony. A public memorial celebrating his life will be scheduled later in the year at a time and a place to be announced. The family wishes to acknowledge the outstanding care and assistance of Dr. Tyler Taylor, Darlene George and Arlene Garcia in Martin’s later years and acknowledge the condolences and well wishes already received and those to be received.