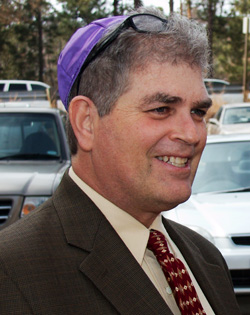 On January 31, the sun came out in upstate New York after a cold snowstorm; the sky was blue, the air was crisp, and Mark Wolfsberg passed away peacefully in his sleep in his home in Delmar. His entire family was home along with his mother, mother in law, and brother. He was a week short of his 53rd birthday.

During his four-year battle with cancer, Mark was an inspiration with his honest and straightforward understanding of his condition, always putting a positive face on the situation, never wallowing in self pity, and leading a full life until very recently. He was a good caring person and his memory will serve as a blessing to many.

In the past year, Mark was able to travel to his home state of New Mexico twice, once in February with his family for his niece’s Bat Mitzvah, where he chanted a Hebrew portion out of the Torah and then spent some time in the steep terrain of Taos Ski Valley. He returned to New Mexico again in August for a month to help his mother during her recovery from back surgery. Mark also traveled with his wife, sons, and his extended New Mexico family to Belize where he scuba dived, snorkeled, and enjoyed good times on the island.

Mark started skiing at age 5 and loved it his entire life. He took numerous trips with his family, brother, or friends over the years and was a ski instructor at nearby Jiminy Peak. Mark was dedicated to his family and very proud of his sons, rejoicing in Jacob’s accomplishments in physics at Northeastern University, Eric’s national recognition in History Bee and Quiz Bowl competitions, and Ethan’s guitar and academic work as he emerges as a fine young man.  Mark always helped with their boy scouting activities and other interests, including baking cookies for bake sales to help raise money for the academic competition travel. He loved listening to his boys sing and was particularly thrilled with their Karaoke sessions on a recent family cruise.

Mark grew up in Los Alamos, New Mexico and studied business computer systems at the University of New Mexico. His first job was with IBM in Endicott, NY, where he met his wife Stacy – they were married in 1987 and moved soon thereafter to pursue new IBM opportunities in Dallas TX, where they lived for 12 years and started their family before returning to the Albany area in 2000, which Stacy’s mother says was one of the happiest days of her life.

Before his condition worsened last week, Mark and Stacy had planned to spend a week in Key West. According to Jacob, Mark really liked the Beach Boys; perhaps he was dreaming of Kokomo as he slipped peacefully away.

The service will be later this week – the date and time will be announced soon through Durant Funeral Home (518.455.9155).

In lieu of flowers, memorial contributions may be made to the Bethlehem Central Community Foundation to provide financial assistance for BCHS history bowl and quiz bowl teams.