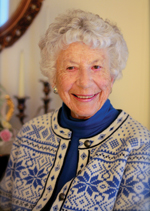 Marilyn Jane Edinger Riechman was born in Evanston, Illinois on June 12, 1926 to Marjorie and Clarence Edinger. She was a graduate of Evanston High School, followed by two years at the University of Montana at Missoula, where she was a member of Kappa Kappa Gamma. Friendships made there have been treasured lifelong. After a long period of illness, she graduated in 1952 with a B.S from the University of Wisconsin, Oshkosh. She began her teaching career in Port Washington, Wisconsin, then moved to Madison, Wisconsin, supervising student teachers from the University in addition to her classroom duties.

In 1957 Marilyn moved to Los Alamos where she taught at the former Mesa School. During this time she and Norm Riechman met and in 1961 were married in her family home in Green Bay, Wisconsin. They enjoyed fifty happy years together until Norm’s death in January 2012. Their lives were enriched by the birth of their precious daughter, Jane Marjorie Mary, in 1962, and much later their beloved grandson, Steven, a Software Developer. Marilyn later continued her teaching career at Pinon Elementary school. Throughout her life children and education remained of the deepest importance.

Marilyn was an originator and co-chairman for the Los Alamos Medical Center Chapel. She and her family have been long-time members of Bethlehem Evangelical Lutheran Church, where she taught Sunday school and later served as a Stephen Minister for twelve years. She was a co-facilitator for the First Offender program. After retirement she enjoyed driving the Senior Van and associations with the elderly, and later served as a volunteer at the Senior Center.

All her life Marilyn loved the outdoors, biking, skiing, walking, and swimming. She and Norm spent happy times at art museums, opera, symphony and travel, both here and abroad. She placed the deepest value on her family, friends, music, and art, along with the beauty surrounding Los Alamos.

Marilyn died of congestive heart failure, with a lifelong condition of Crohn’s disease. She is survived by her daughter Jane, grandson Steven, brother James Edinger and wife Pudge; one niece, Jayme and four nephews, Rick, Mont, Blake, Craig and their families.

Her memorial service will be held on Friday, November 18th, 2016, at 11am at Bethlehem Evangelical Lutheran Church, 2390 North Road, Los Alamos, New Mexico. In lieu of flowers, memorial gifts may be sent to the Facility Capital Improvement Fund of the Bethlehem Evangelical Lutheran Church, or to the Espanola Valley Humane Society. The family of Marilyn Jane Edinger Riechman has entrusted the care of their loved one to the DeVargas Funeral Home & Crematory of the Espanola Valley. 505.747.7477, www.devargasfuneral.com.