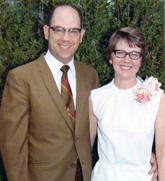 M. Maxine (Max) Ritter peacefully went to her Lord in Heaven early Tuesday morning, November 8, 2016 in Harlingen, Texas. She was 87.

Maxine was born March 7, 1929, in Gerster, MO then spent most of her younger years in Kansas. She worked as a nurse for many years in Colorado then Albuquerque and at Los Alamos Medical Center before she joined Jim as business owner of Decol’s Inc.

Jim was born June 14, 1927, in St. Louis, MO where he spent most of his younger years. He worked as a salesman for many years in Colorado then Albuquerque, NM.  In the early 1950’s they bought Decol’s Inc. in Los Alamos, NM where they sold cameras, stereo equipment and Hallmark cards.

They were married on November 11, 1950 in Greeley, CO. They loved traveling the United States in their motorhome as well as enjoyed two trips to the Holy Lands, sailing trips in the Caribbean and scuba diving with the manatees in Florida.

They are survived by their daughter Jan Michel of Los Alamos NM; four nephews of Cody, WY and Midland, TX and two nieces of Denver and Greeley, CO.

Jim has a sister Mary Ann Silence (Si) of Ames, IA and a brother Bill Ritter of San Diego.

Jim is preceded in death by his parents Alvin and Catherine Ritter of Payette, ID, and younger sister Kay Whitt.