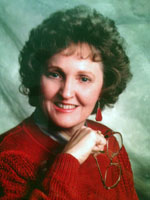 DALLAS – At 6:17 p.m., on Saturday, April 4, 2015, Lona Perkins Cappis, age 73, quietly passed away at Kindred Hospital in Dallas, Texas after long bout with respiratory illness. Her immediate family were there to comfort her. Lona was a long-time resident of Los Alamos with many ties to the people and the town.

She also had a love of culture and travel. Her passion for reading, history, and genealogy, turned every trip into a living, breathing story. Her adventures included time in Greece, Turkey, Switzerland, Germany, the Netherlands, Czechoslovakia, Hungary, Italy, Spain, France, the United Kingdom, and Egypt.

After graduating from Texas Western College with a bachelor’s degree in education, Lona moved to Los Alamos, New Mexico to teach elementary school children. It was there that she met John Cappis. Although it took a bit of work for him to gain her attention, they were married and recently celebrated their 50th wedding anniversary. Lona left her teaching job to spend time raising their two sons.

Her passion for learning continued as she went on to complete a Masters of Business Administration degree from the University of New Mexico. She later became an entrepreneur, co-founding the Liquipac company. She also holds a patent for the design of the Liquipac. She later became a travel agent and worked at an agency in Los Alamos before moving to the travel office at the Los Alamos National Laboratory.

During her time living in Vienna, Austria, she was an active member of the United Nations Women’s Guild. As part of their charitable fund-raising efforts, Lona authored a book about day trips around Vienna. It was one of the first books to be published by a Czechoslovakian publishing company after the fall of the iron curtain. She would later author another short book as part of her genealogy research.

After retiring to the mountains of Southwest Colorado, she and John moved to Dallas to be closer to family.

She is preceded in death by her mother, Lona Brown Perkins and her father, Ivan Perkins.